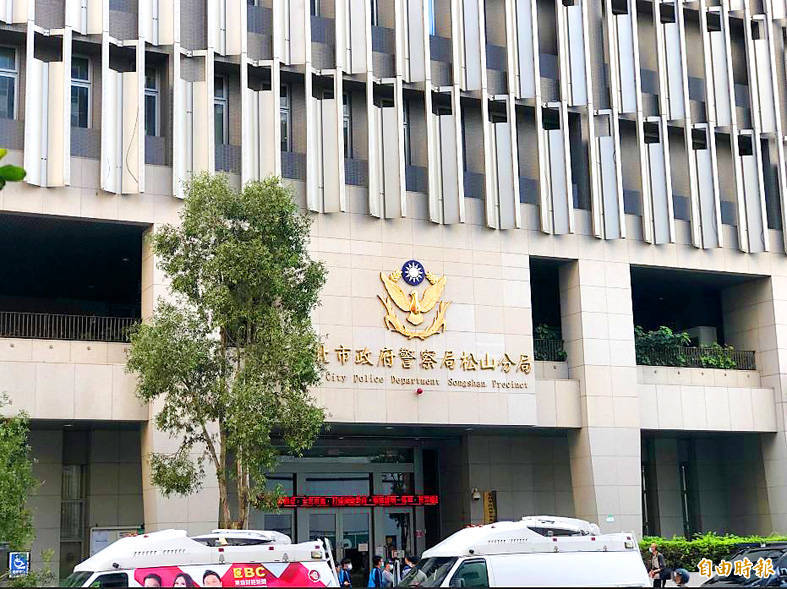 ‘BIG MISUNDERSTANDING’: Investigators said a young man named Hsu and his friends went to the precinct to explain, apologize and offer to pay for the damage

Minister of the Interior Hsu Kuo-yung （徐國勇） and National Police Agency Director-General Chen Ja-chin （陳家欽） have vowed a thorough investigation of a violent incident involving a band of young men allegedly chasing a Songshan Precinct official through the station.

The incident, which was reportedly covered up at first, was said to begin as a street quarrel between the young men and Yang Chung-li （楊忠蒞）, 49, the physical training instructor at the precinct.

Media reports said that on Thursday last week, an off-duty Yang was having dinner and drinks with friends until 2am, when he took a taxi back to his precinct office.

Near the station, Yang allegedly had an argument with a group of young people — described as clad in black clothing — before yelling at them to be quiet and following it up with curse words.

A quarrel ensued and the group allegedly drew closer to Yang to continue the dispute.

Yang felt threatened and ran to the station to get away from the group.

Video footage shows the young men running after Yang and chasing him right into the precinct.

One of them, a 22-year-old surnamed Hsu （徐）, is shown knocking objects off a table, including a desktop computer, which was damaged when it fell to the floor.

Later, when reporters asked the young men how they could be so brazen as to take their quarrel into a police station, barging past the duty officers, Hsu said that they were unaware that Yang was a police instructor, because he was wearing street clothes.

He and his friends thought that Yang was a local hoolum provoking a fight and who then ran to hide in the station, Hsu said, adding that “it was all a big misunderstanding.”

Hsu said that he got riled up when Yang swore at them and that, when they ran into the station, he bumped the computer by accident.

After the media reports surfaced, Hsu and a dozen of his friends went to the precinct to apologize, submitting a “letter of repentance” to explain what had happened and offering to pay for the damage, investigators said.

Background checks showed that the young men had no gang affiliations, the investigators said, adding that Hsu and his friends had also been out late having drinks and chatting in the street when “the misunderstanding” took place.

There were allegations that Precinct Chief Lin Chih-cheng （林志誠） at first tried to cover up the incident by not reporting the intrusion or the damage.

Under pressure from all sides, Lin convened a news conference yesterday, saying that an internal investigation was conducted.

Yang received a demerit point and has been demoted to another job, while a police station official surnamed Hsu （許） was reprimanded for not reporting the incident to his superiors.

Hsu Kuo-yung said that after hearing the news reports, he had demanded Chen to investigate and ordered Lin to clarify details of the case at the news conference.