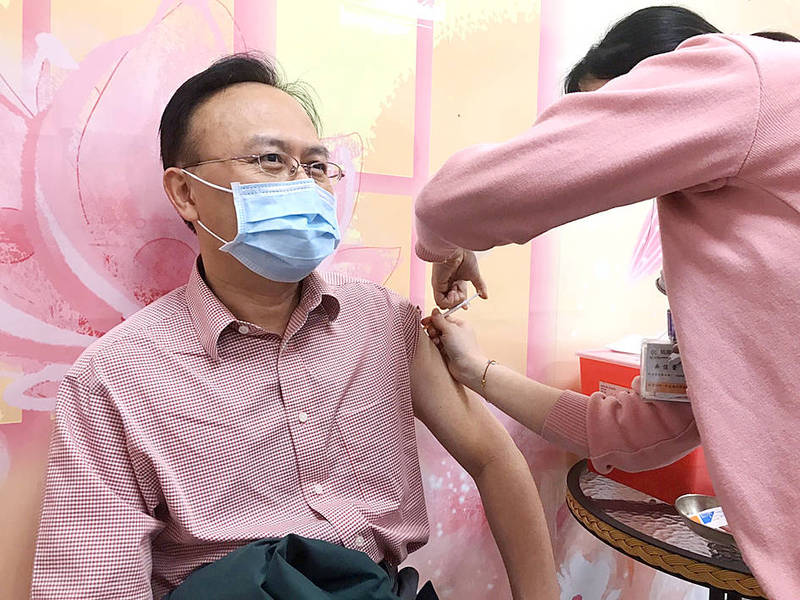 A man is inoculated with the AstraZeneca vaccine at Keelung Hospital yesterday, which was the first day that members of the public could get an out-of-pocket shot. Photo: CNA

Minister of Health and Welfare Chen Shih-chung （陳時中）, who heads the center, said the center is expanding eligibility to the next two priority groups tomorrow because too few people have so far received a government-funded dose of the AstraZeneca COVID-19 vaccine.

In the fifth priority group are those who maintain public order and security, such as police officers and military police, he said.

In the sixth priority group are workers and residents of long-term care facilities and social welfare institutions, as well as correctional facility workers, he added.

The fifth priority group is comprised of about 50,000 people and the sixth group of about 200,000 people, which means that starting on Friday, about 868,000 would be eligible for government-funded vaccines, Chen said.

People who have been informed of their vaccine eligibility can make an appointment with one of the 174 vaccination hospitals, the center said, adding that people should take their National Health Insurance card or identification documents with them to the appointment.

On Tuesday, 775 people received shots for a total of 34,197 doses administered so far, said Centers for Disease Control （CDC） Deputy Director-General Chuang Jen-hsiang （莊人祥）, who is the spokesperson of the CECC.

The AstraZeneca vaccine is just as safe as some of the other vaccines, and is just as effective at preventing serious complications from COVID-19 or death, he added.

Israel on Sunday lifted its outdoor mask mandate, after more than 80 percent of the population got vaccinated, Chen said, adding that the mask mandate in Taiwan could be lifted if vaccination coverage reached a high level, although the CECC would still advise masks.

More than 5,000 people have made appointments to receive a self-pay vaccination this week, and several hospitals started offering out-of-pocket vaccinations from yesterday morning, Chuang said.

As more people seem to be enthusiastic about out-of-pocket shots, more doses would likely be allocated to that group, Chen said.

However, eligibility for self-pay shots — which are limited to people traveling abroad for work, study or medical treatment — would not be expanded, he added.

Chen encouraged people who have gotten vaccinated to register with the CDC’s Taiwan V-Watch online vaccination follow-up platform, saying that they should regularly update their health status.

“Reporting on the platform can help us better understand adverse events, including symptoms and other aspects, following vaccination,” he said. “It is beneficial to the person who got vaccinated as well as other people.”