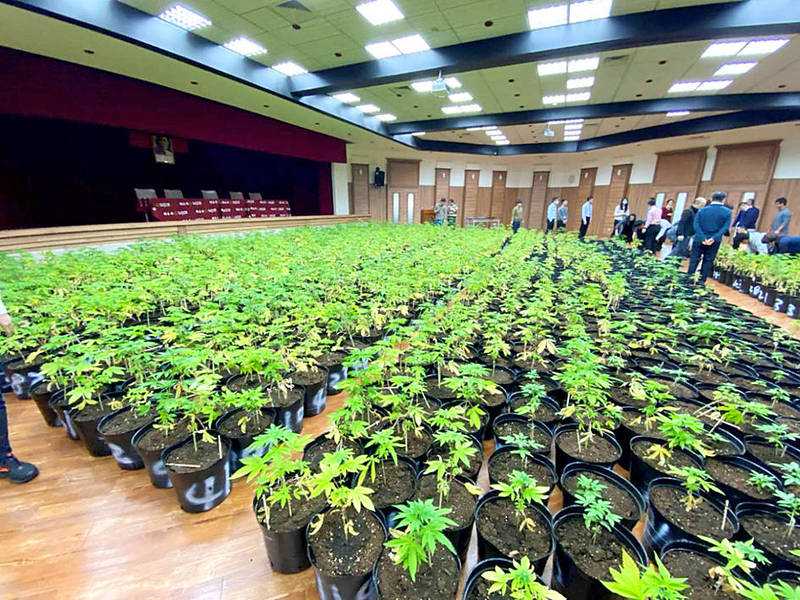 LARGEST EVER: Police raided an illegal greenhouse in Hsinchu County and detained two men, and were looking for the operation’s suspected mastermind

Minister of Justice Tsai Ching-hsiang （蔡清祥） yesterday presented the results of a raid on an illegal cannabis farm in Hsinchu County, where police seized more than 1,600 cannabis plants with an estimated street value of NT$500 million （US$17.76 million）.

It was the largest cannabis seizure in Taiwan, officials said.

Speaking at a news conference at the Ministry of Justice Investigation Bureau Taipei Field Station, Tsai reiterated his ministry’s tough stance against illegal drugs and said it would continue to crack down on cannabis.

Police on March 19 raided a greenhouse in the hills of Guanhsi Township （關西）, a bureau official said.

Two men, surnamed Chiu （邱） and Yu （虞）, were detained on suspicion of running the greenhouse, and 1,608 potted cannabis plants were seized.

The bureau in a statement touted the operation as highly successful.

It praised bureau officials “for working from early morning to late night on that day” to search the site, gather evidence and transport the seized plants to Taipei for investigation in the biggest domestic cannabis seizure.

An investigation has been launched into the criminal ring and its alleged mastermind, who is suspected of providing financial backing and instructions to Chiu and Yu, the bureau said.

The bureau said it waited until yesterday to announce the bust, as it was one day after April 20, which is an annual day of celebration for marijuana users.

Tsai and bureau officials at the news conference presented seized materials, including dried cannabis leaves and buds, machines and equipment for desiccating, cultivating and watering the plants, as well as lighting equipment.

“There are people in Taiwan advocating for the decriminalization of cannabis, but this does not conform to the conditions in our nation... Cannabis is still a Category 2 narcotic under the law and authorities will crack down against it,” Tsai said, referring to the Narcotics Hazard Prevention Act （毒品危害防制條例）.

“It is our resolve to combat illegal drugs and we will not accept such a suggestion [decriminalization of cannabis]. Judicial investigators will continue to fight against cannabis smuggled from abroad or grown within our nation,” he added.

A group of more than 1,500 people on Saturday last week rallied outside the legislature to demand that the government decriminalize cannabis and legalize marijuana for medical use. The event drew a heavy police presence and sniffer dogs.

Officials at yesterday’s news conference told reporters that “each cannabis plant has a street value of NT$300,000 when dried and sold for consumption to users.”

The 1,608 plants seized at the raid would amount to nearly NT$500 million, which is “a record haul” for the bureau, they said.

However, marijuana advocacy group Green Sensation has in the past few years disputed the estimated values presented by officials, saying they are highly unrealistic and overly exaggerated.

It has accused the bureau and judicial investigators of announcing higher street prices to take more credit and gain higher performance citations, and for informants to claim higher monetary rewards for tip-offs.