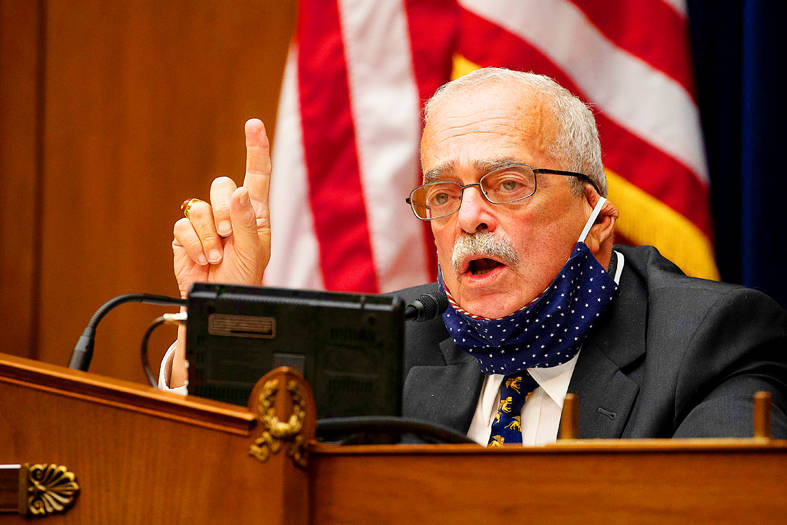 US Representative Gerry Connolly speaks at a House Committee on Oversight and Reform Subcommittee on Government Operations hearing on “IRS in the Pandemic” in Washington on Oct. 7 last year . Photo: Reuters

SOLIDARITY WITH TAIWAN: MOFA thanked US lawmakers for introducing the bill, which aims to clarify the content of UN Resolution 2758 and questions Beijing’s claim to represent Taiwan in international organizations

A bipartisan coalition of US congressmen on Monday introduced legislation that aims to counter China’s claim to represent Taiwan in international organizations.

“For too long, Beijing has distorted policies and procedures at the UN and related bodies to assert its sovereignty claims over Taiwan, often to the detriment of global health and security efforts,” US Representative Gerry Connolly said in a news release.

“This bipartisan legislation ensures that we stand in solidarity with this critical US partner,” he said.

Connolly cosponsored the bill with the three other chairs of the Congressional Taiwan Caucus — US representatives Albio Sires, Mario Diaz-Balart and Steve Chabot — along with US Representative John Curtis and US Representative Ami Bera, who chairs the foreign affairs subcommittee on Asia.

According to a draft provided by Curtis’ office, the “Taiwan International Solidarity Act” foremost aims to clarify the content of UN General Assembly Resolution 2758, which recognizes the People’s Republic of China （PRC） as “the only legitimate representative of China” in the UN.

The 1971 resolution says nothing about Taiwan’s representation in the UN or related organizations, nor does it declare a stance on the relationship between the PRC and Taiwan, the draft says.

The PRC has long used the resolution “as a pretext to bully the international community into supporting its bogus sovereignty claims over Taiwan and its ‘one China’ principle, despite the fact the resolution does not address Taiwan’s status,” Chabot said.

This has led to Taiwan’s exclusion from organizations such as the WHO, Interpol and the International Civil Aviation Organization, he added.

Whenever appropriate, US representatives should use their voice, vote or influence to resist Chinese attempts to “distort the decisions, language, policies or procedures of such organizations regarding Taiwan,” the draft says.

It also declares US opposition to any attempts to change Taiwan’s status without the consent of the Taiwanese people.

The bill would amend the Taiwan Allies International Protection and Enhancement Initiative （TAIPEI） Act of 2019, which instructs the US to advocate for Taiwan’s participation in such organizations.

“The TAIPEI Act has greatly strengthened our relationship with Taiwan... However, since the bill’s signing last year, China has mounted pressure on international organizations to claim that Taiwan is part of China,” Curtis said. “This bill adds to the TAIPEI Act in a way that would counter these attempts.”

One addition would instruct the US to encourage its partners to oppose Chinese efforts to undermine Taiwan’s official and unofficial relations with other countries.

This would strengthen a provision in the TAIPEI Act that instructs the US to support Taiwan’s efforts to bolster its global partnerships.

The bill would also instruct the US secretary of state to detail in their annual report past and current efforts by China to weaken Taiwan’s participation in international organizations.

This adds to the TAIPEI Act provision instructing the US Department of State to report to Congress annually on its efforts to bolster Taiwan’s global partnerships.

The bill is to be deliberated in the US House of Representatives Committee on Foreign Affairs before it is presented to the entire House for a vote. If it passes, it would be sent to the US Senate for approval before the president can sign it into law.

The Ministry of Foreign Affairs （MOFA） yesterday welcomed the proposal, saying it would pay close attention to its progress.

Ministry spokeswoman Joanne Ou （歐江安） thanked the US Congress for its continuous and concrete efforts to support Taiwan.

The government would maintain close communication with its friends on Capitol Hill and in the US administration, and seek more opportunities for collaboration, she told a regular news conference. 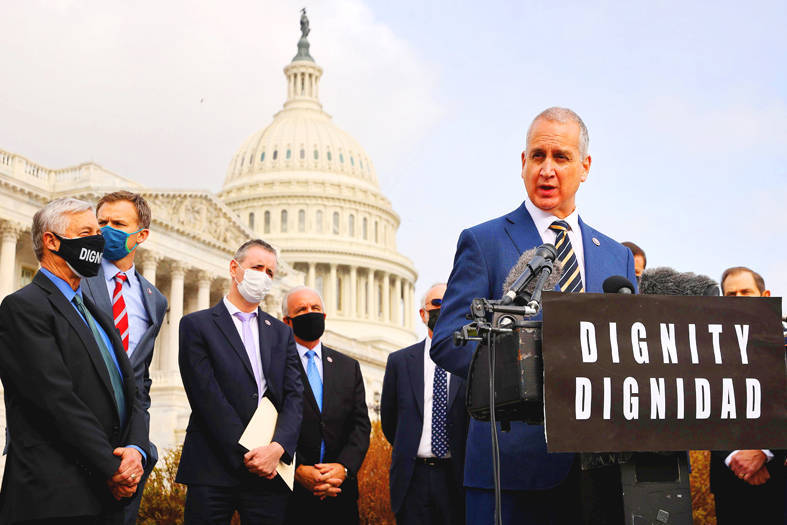 US Representative Rep. Mario Diaz-Balart speaks during a news conference about immigration outside the US Capitol on March 17 in Washington. Photo: AFP