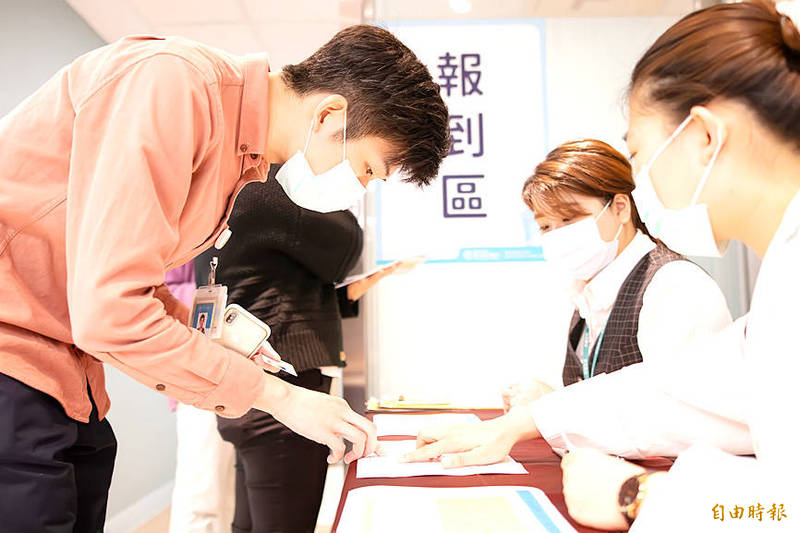 Several hospitals yesterday reported that they were fully booked for self-pay COVID-19 vaccines — the first day they started accepting appointments for the jabs.

The center last week announced that starting tomorrow, 10,000 doses of the AstraZeneca COVID-19 vaccine would be offered to people who are traveling abroad for business, work, study or medical treatment at 31 designated hospitals.

National Taiwan University Hospital reported that its vaccine quota for the next two weeks was fully booked within hours of opening. Mackay Memorial Hospital in Taipei said that more than 1,300 people booked appointments for this month, and several other hospitals said they were fully booked for tomorrow.

The 10,000 doses for self-pay vaccinations are for 5,000 people to receive two doses each, but if public demand quickly exceeds 5,000, the CECC would consider releasing more for self-pay inoculations, said Centers for Disease Control Deputy Director-General Chuang Jen-hsiang （莊人祥）, who is the CECC spokesman.

The CECC will pay close attention to the rollout of self-pay vaccines when it starts tomorrow, he said.

The CECC is also monitoring the government-funded vaccination program and might consider expanding eligibility to more priority groups, he added.

Only 28 people were vaccinated on Saturday, raising the total number of vaccinated people in Taiwan to 32,450, he said.

An additional 24 reports of adverse reactions after vaccination were reported in the past few days, he said.

That includes one case of a suspected serious adverse event — a woman in her 20s who reported fatigue, muscle soreness, chills, a fever, joint pain, nausea and pain at the injection site on the day she was vaccinated, but her symptoms have been relieved, Chuang said.

A previously reported case of a mild adverse event was later deemed by the Food and Drug Administration as a likely case of a serious allergic reaction to the vaccine, adding to a total of three cases in the nation so far, he said.

That was a woman in her 50s, who reported swelling and numbness in the mouth and tip of the tongue, nausea, a fever, shortness of breath and hypertension about 10 minutes after receiving a vaccine shot, but her symptoms were relieved after taking drugs to treat allergies and she was discharged from the hospital that night.

The CECC also reported three imported cases of COVID-19 — two Filipinas and an Indian man who came to work in Taiwan. None of them had any symptoms.

The two Filipinas in their 30s arrived on April 4 and tested positive after ending centralized quarantine on Saturday, Chuang said.

The Indian man, who is in his 20s, arrived on April 2, completed quarantine at a hotel and tested positive in a paid test on Saturday, Chuang said.