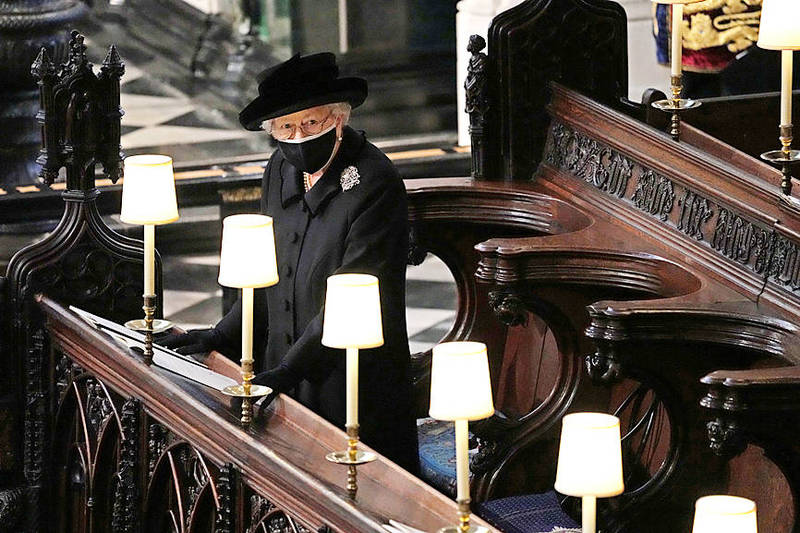 Queen Elizabeth II on Saturday bid farewell to her late husband, Prince Philip, at a royal funeral like no other, restricted by COVID-19 rules but reflecting his long life of military and public service.

The Duke of Edinburgh, who died on April 9 aged 99, was interred in the Royal Vault at St George’s Chapel at Windsor Castle after a 50-minute service attended by just 30 guests.

Philip — described by royals as “the grandfather of the nation” — was Britain’s longest-serving royal consort and was married to the queen for 73 years.

He was an almost constant presence at her side during her record-breaking reign that began in 1952 as the UK rebuilt from World War II, and as its global empire began to unravel.

His death, which the family said has left a “huge void” in the queen’s life, has robbed her of the man she called her “strength and stay” and closes a remarkable chapter for Britain’s most famous family, and in the country’s history.

The last high-profile funeral of a senior royal was for the queen’s mother, who died in 2002, aged 101.

Unlike then, when more than 1 million people thronged outside Westminster Abbey in central London to watch the sombre pageant, the public was noticeably absent from Saturday’s ceremony.

The COVID-19 pandemic forced hasty revisions to the well-rehearsed plans for the duke’s death, code-named “Operation Forth Bridge,” stripping back public elements to prevent large crowds from gathering.

Government guidelines limited the number of mourners and a quartet performed hymns the duke chose himself in a barren nave stripped of seating.

The intimate, ceremonial funeral from behind the stately castle walls was broadcast live on television to millions across the UK and the world.

A military gun was fired to signal a minute’s silence when his coffin arrived at the chapel on a bespoke Land Rover he designed himself.

The coffin was draped in his standard and topped by a wreath of white roses and lilies from the queen, as well as his naval cap and ceremonial sword.

Across the UK — on the streets, in shops, railway stations and at sporting events — people bowed their heads in respect.

Flights in and out of nearby Heathrow Airport were stopped for the duration of the ceremony.

Ieuan Jones, 37, traveled to Windsor from his home in the Welsh capital, Cardiff, and called Philip “a strong man, a true hero [who] did so much for this country and the royal family.”

“It’s really a shame that because of the pandemic we can’t pay a wider tribute to the exceptional man he was,” he said.

Despite the restrictions, the stripped-down sendoff for the former Royal Navy commander still combined centuries of royal protocol with pomp, pageantry and military precision.

Members of the British armed forces, in formal dress, lined the procession route, heads bowed, as the cortege passed, as a minute gun rang out across the grounds and a bell tolled.

Philip’s grandsons William, 38, and Harry, 36, joined the procession, in their first public meeting since a reported falling out about Harry’s shock move to California, and his stinging criticism of royal life, including racism in the family.

They were later seen chatting as they left the chapel with William’s wife, Kate.

The religious service was a simple affair, reflecting the wishes of the straight-talking duke, who was known for his aversion to “fuss.”

In keeping with his wishes, there was no sermon, but the service reflected his love of the sea and long association with the Royal Navy, including hymns and Bible readings.

Britain’s Prince William, foreground, and Prince Harry walk in a procession during the funeral of Britain’s Prince Philip at Windsor Castle in England on Saturday. Photo: Reuters