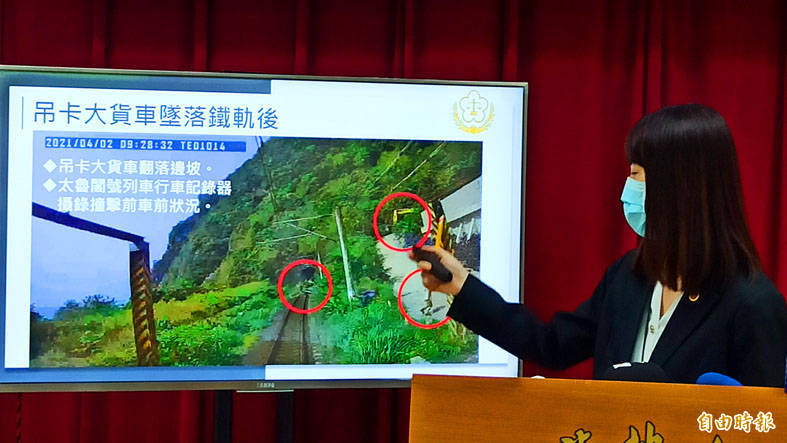 Hualien Prosecutor Chou Fang-yi yesterday points to an image of the site of the April 2 Taroko Express derailment during a news conference in Hualien. Photo: Wang Chin-yi, Taipei Times

NARROWING DOWN: After searches at 23 locations and questioning 109 people, prosecutors say that mishandling at a construction site might have caused the crash

Prosecutors yesterday indicted seven people in connection to the Taroko Express No. 408 derailment in Hualien County on April 2, in which 49 people died and more than 200 were injured.

Among the indicted were Lee Yi-hsiang （李義祥）, the driver of a crane truck that fell onto the tracks and into which the train crashed; his Vietnamese assistant, Hoa Van Hao; and workers at United Geotech Inc （聯合大地工程） and Tung Hsin Construction （東新營造）, which undertook construction work near the site of the crash, Hualien prosecutor Chou Fang-yi （周芳怡） said.

Lee, who owns Yi Hsiang Industry （義祥工業社）, was indicted for negligence resulting in death and property damage, causing an accident involving a public transportation vehicle, fleeing the scene of an accident, document forgery, accounting fraud, and breaches of the Government Procurement Act （政府採購法）, she said.

Hoa, who was near the site at the time of the crash, and Chang Chi Fu-tsai （張齊富財）, a labor safety and health inspector at United Geotech, were charged with negligence resulting in death, she said.

Lee Chin-fu （李進福） a United Geotech construction superintendent, was charged with negligence in causing death and document forgery, she said.

Huang’s son, Huang Wen-li （黃文利）, who is listed as the owner of Tung Hsin Construction, was indicted for accounting fraud, tax evasion, falsifying business documents, and giving deceiving information on work operations and progress on the project, she said.

The investigation is still ongoing, and three other suspects could face charges, she said.

They are Yang Chin-lang （楊金郎）, an engineer who allegedly lent his license to Tung Hsin so that it could win the tender for the project, Hsiung Teh-yu （熊德育）, a construction superintendent at the Taiwan Railways Administration’s （TRA） Hualien Engineering Section, and Pan Tang-yi （潘堂益）, a supervising engineer for the section, Chou said.

Prosecutors said they had conducted searches in 23 locations and questioned 109 people, finding that Lee Yi-hsiang’s and Hoa’s mishandling of the crane truck and an excavator might have caused the crash.

Fraudulent business practices, might also have contributed to Taiwan’s deadliest train crash in Taiwan in 40 years.