《TAIPEI TIMES》Moderna vaccines expected in May 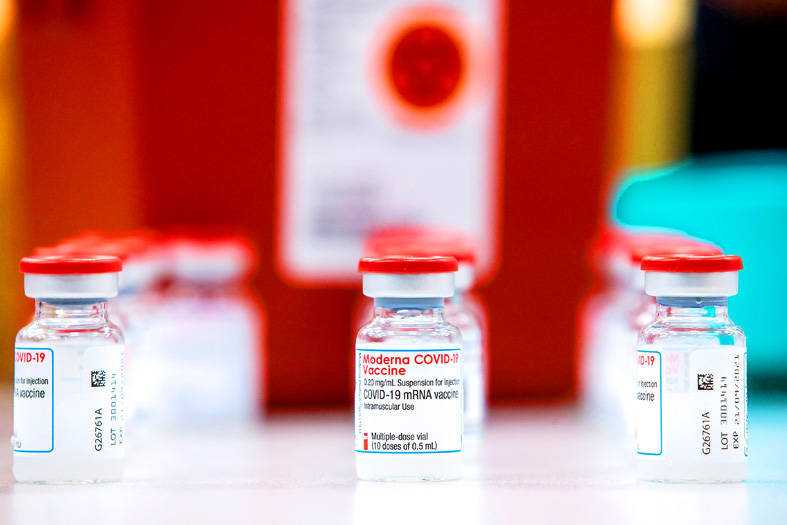 Vials of the Moderna COVID-19 vaccine are pictured at a facility of pharmaceutical company Apotex in Toronto on Tuesday. Photo: Reuters

MORE TRUSTWORTHY? While officials investigate whether the shelf life of AstraZeneca vaccines can be extended, the Moderna jab might boost inoculations

Shipments of Moderna COVID-19 vaccines are due to arrive in Taiwan next month, while another batch of AstraZeneca vaccines allotted to Taiwan under the COVAX program is due to arrive by June, the Central Epidemic Command Center （CECC） said yesterday.

The Chinese-language Apple Daily reported that the Moderna vaccines might arrive at the end of this month or next month.

The center in February said that Moderna had agreed to supply about 5 million doses to Taiwan, although at the time the center estimated that they would arrive in the middle of this year.

Centers for Disease Control Deputy Director-General Chuang Jen-hsiang （莊人祥）, who is the CECC’s spokesman, said that 9,470 additional AstraZeneca shots had been sent to 68 medical facilities to expedite the rollout.

The CECC would also provide shots to local health departments, Chuang said, amid reports that vaccinations are lagging due to wariness among the public.

The Apple Daily quoted National Taiwan University Children’s Hospital pediatrician Huang Li-min （黃立民） as saying that low administration rates of the AstraZeneca vaccine was due to safety doubts, not people failing to heed CECC recommendations to get the jab.

The AstraZeneca vaccine has been linked to unusual blood clots, resulting in reluctance to get the shots, Huang said, adding that the Moderna vaccines should not draw the same skepticism.

The CECC is moving forward with the vaccine rollout, Chuang said.

The Food and Drug Administration has been asked to contact the manufacturers of the vaccines and inquire about extending their shelf life.

Two shipments of AstraZeneca vaccines expire on May 31 and June 15.

Regulations say that the manufacturer must conduct a stability test before an application to extend a shelf life can be submitted, Chuang said.

In the worst case, the expiration date would be unalterable and the vaccines disposed of, he said.

Asked about Denmark’s decision to stop its rollout of AstraZeneca vaccines completely, Chuang said that nations have their own considerations and standards, citing decisions in the US and Australia to halt inoculations with the Johnson & Johnson vaccine, while France is pushing forward with that product.

Including 1,319 people given the the AstraZeneca vaccine on Wednesday, Taiwan has inoculated 28,465 people, Chuang said.

Twelve cases of an adverse event following immunization were reported on Wednesday, but the cases were not severe, he said.

A Taiwanese aged under five who had been living in Indonesia arrived in Taiwan on March 28 with case No. 1,036, the CECC said.