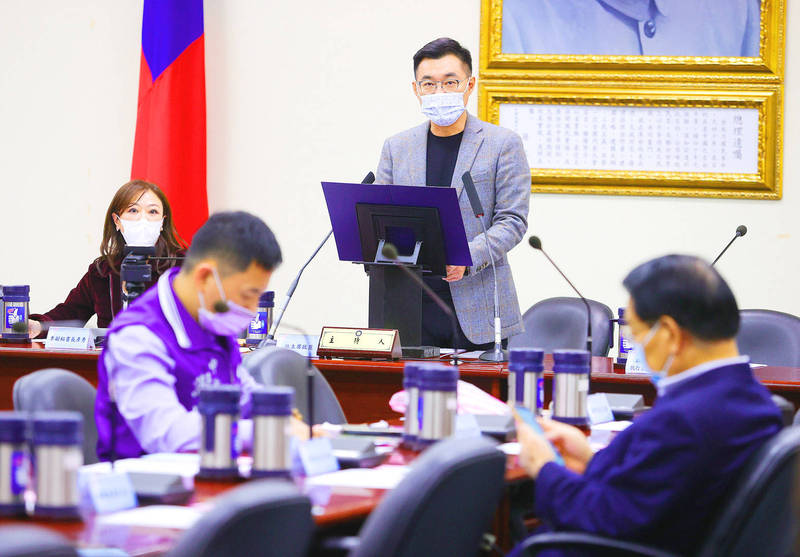 ‘SPLIT PERSONALITY’: A DPP spokeswoman said the KMT is protesting the Fukushima wastewater plan while still calling for the activation of the Fourth Nuclear Power Plant

The Chinese Nationalist Party （KMT） yesterday called for a firmer response from the government to Japan’s decision to release processed wastewater from the Fukushima Dai-ichi nuclear power plant into the ocean.

The decision to begin discharging the wastewater into the ocean in two years was announced by the Japanese government on Tuesday.

If the water is not treated properly, it would contaminate the entire marine ecosystem and affect the rights of the nation’s fishers, KMT Culture and Communications Committee director-general Alicia Wang （王育敏） told a news conference in Taipei.

It might also make Taiwanese feel uneasy about consuming aquatic products and cast another shadow over food safety in the nation, she said.

Unlike international organizations such as Greenpeace or Japan’s other neighbors such as South Korea, the Presidential Office and the Executive Yuan “have not dared to speak loudly in protest” of the situation, Wang said.

She accused President Tsai Ing-wen’s （蔡英文） administration of having “seriously neglected” its duty to defend the nation’s food safety, citing its decision in August last year to allow imports of US pork containing traces of animal feed additive ractopamine, and its lack of a firm condemnation with regard to Tokyo’s latest decision.

The government’s response to Japan’s plans to release the wastewater into the ocean has been “too weak,” Wang said, urging the Tsai administration to “toughen up.”

The KMT urges the government to express the nation’s “solemn stance” on the issue and to lodge a protest with Japan, she said.

“We support maintaining positive and friendly relations between Taiwan and Japan, but when faced with national interests, including the dispute over the Diaoyutais （釣魚台列嶼）, we should not yield one inch,” committee deputy director-general Huang Tzu-che （黃子哲） said.

When faced with important issues of food safety and health, including food or water contaminated with radiation, “we should not yield a single step,” Huang added.

Representative to Japan Frank Hsieh （謝長廷） should faithfully convey to the Japanese government the nation’s opposition to the release of the wastewater into the ocean, Wang said.

The government should lodge a firm protest with the Japanese government to defend the nation’s food safety, and the rights and interests of the nation’s fishers, as well as protect the safety of waters surrounding Taiwan, she said.

Democratic Progressive Party （DPP） spokeswoman Hsieh Pei-fen （謝佩芬） accused the KMT of having a “split personality,” as it is protesting Japan’s decision while also calling for the activation of the Fourth Nuclear Power Plant in New Taipei City’s Gongliao District （貢寮）.

As the government has already clearly stated, the Ministry of Foreign Affairs, Council of Agriculture and other agencies have expressed concern about the plan to Tokyo many times, Hsieh said, adding that the Atomic Energy Council （AEC） has also expressed its formal opposition.

The DPP has always opposed nuclear power and has vigorously promoted the nation’s energy transition under the “nuclear-free homeland” policy, she said.

“Unfortunately, we are once again seeing the KMT blow things out of proportion for political gain,” Hsieh said.

The KMT tried to imply that the AEC only expressed regret over Tokyo’s decision, but in reality, it voiced opposition before the decision was even made, and is also demanding that Japan furnish all information on safety measures, she said.

While the DPP’s stance is clear, the KMT’s is contradictory, Hsieh said.

“If the KMT is opposed to Japan’s dumping of nuclear wastewater, then how can it support starting the Fourth Nuclear Power Plant, which would produce nuclear waste?” she asked.