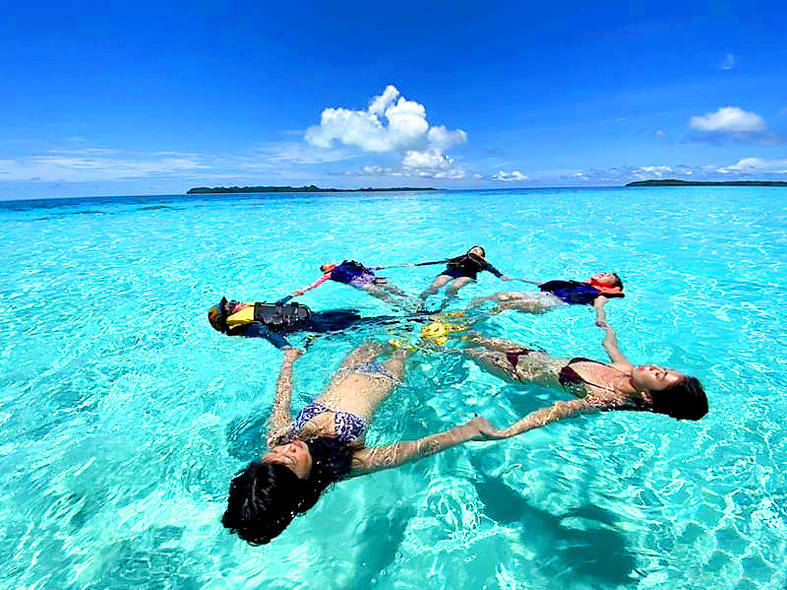 People float in the sea at a beach in Palau in an undated photograph. Photo courtesy of a travel agency

JAB BENEFITS: Vaccinated staff returning on short-haul flights are to be exempted from self-health management and only need to practice a ‘disease prevention lifestyle’

The Central Epidemic Command Center （CECC） yesterday announced that it would ease quarantine regulations for airline crew from today.

Minister of Health and Welfare Chen Shih-chung （陳時中）, who heads the center, said that new quarantine regulations for airline crew would solve the problem of them being in a cycle of flying abroad, quarantine and self-health management.

The regulations were tightened after a cluster of infections linked to a commercial flight, and reports of disease prevention measures not being thoroughly adhered to at layover destinations, Chen said.

As Taiwanese airlines seem to have improved their management, the mandatory quarantine period for flight crews returning to Taiwan was reduced from seven days to five, he said, adding that it would be further reduced to three days.

“Crew members returning on long-haul flights from countries with a level 3 ‘warning’ travel advisory will be subject to three days of home quarantine, and if they return a negative polymerase chain reaction [PCR] test for COVID-19 on the third day, they can practice self-health management for the next 11 days,” Chen said.

Crew members who return on same-day flights and have not entered a country with a level 3 advisory are required to practice self-health management for 14 days, he said.

As crew members are eligible for COVID-19 vaccinations, those who have received the double doses would have quarantine rules loosened further, he said, adding that eligibility would start two weeks after the second jab — or at least 10 weeks after the first, as the doses should be administered at least eight weeks apart.

Vaccinated crew on long-haul flights would be required to practice seven days of self-health management and no more if they tested negative in a PCR test on the seventh day, while those returning on short-haul flights would be exempted from self-health management and only required to practice a “disease prevention lifestyle,” he said.

From yesterday, Taiwanese returning from Palau as part of the COVID-19 “travel bubble” between the allies only need to undergo 14 days of self-health management, but are still required to get a PCR test on the fifth day after they return, Chen said.

A Taiwanese man in his 70s traveled to Canada to visit his family on March 1 and returned to Taiwan on Friday last week, Chen said, adding that the traveler on Monday sought medical treatment for unrelated health issues during home quarantine, but tested positive for COVID-19 at a hospital.

A Russian man in his 40s who tested positive in December last year arrived in Taiwan in January with a negative PCR result, Chen said.

The Russian was aboard a ship from Feb. 4 to Saturday last week after completing home quarantine, but tested positive in a paid test on Monday, Chen said.

A British man in his 40s who tested positive in the UK in January arrived in Taiwan on March 31 with a negative PCR result, but tested positive upon ending his quarantine on Tuesday, Chen said.