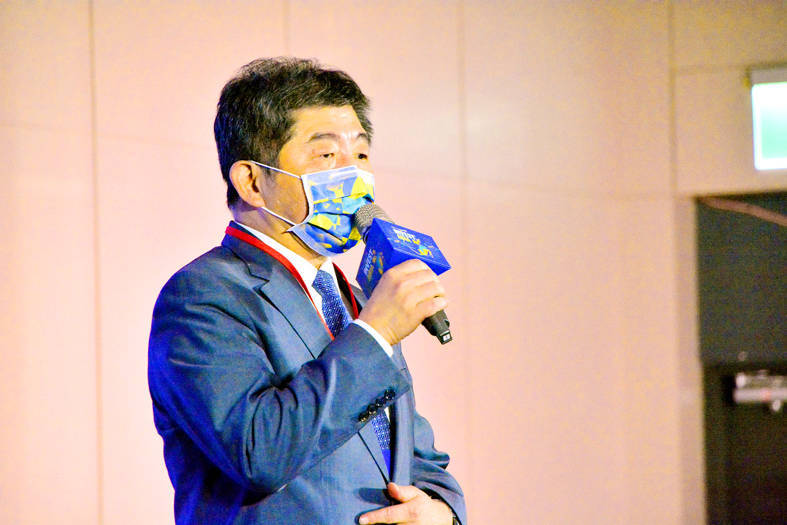 Minister of Health and Welfare Chen Shih-chung speaks at a news conference in Taipei on Saturday. Photo: CNA

All of the public donations for the Taroko Express No. 408 derailment would be distributed to the people most affected, with the first payments expected next week at the earliest, Minister of Health and Welfare Chen Shih-chung （陳時中） said yesterday.

The train was traveling from New Taipei City to Taitung on April 2 when it struck a crane truck that had slid down a hill onto the tracks from a construction site outside an entrance to the Cingshuei Tunnel （清水隧道） in Hualien County, killing 49 people and injuring more than 200.

The ministry on April 3 set up a special disaster relief account to accept donations for the “0402 Taroko Express Accident Case,” while a committee was set up to manage and oversee the funds.

The account had received about NT$810 million （US$28.49 million）, Deputy Minister of Health and Welfare Lee Li-feng （李麗芬）, the committee’s convener, said at its first meeting on Monday.

As many of the people who died were the main breadwinner in their family, the committee decided that at least one-third of the donations would be a one-time payment to support families, Lee said.

The committee would allocate money for seven purposes: living support; medical expenses; education support; counseling services; legal costs and assistance; subsidies for local governments to provide medium to long-term care services; and other purposes approved by the committee, she said.

The account was to be closed at midnight last night, she said.

However, Lee’s announcement sparked debate over why only one-third of the money would go to the families.

As of Tuesday, the ministry had received more than 340,000 donations, totaling more than NT$968 million, and 100 percent of it would go to people affected by the crash, Chen said.

Aside from a small amount to be distributed to local governments to provide group counseling sessions and care services, all of the money would be offered to people affected by the crash, including individual education trust accounts set up for young children with parents who died, Chen said.

The ministry would not use the money for administrative costs or other government expenses, he said.