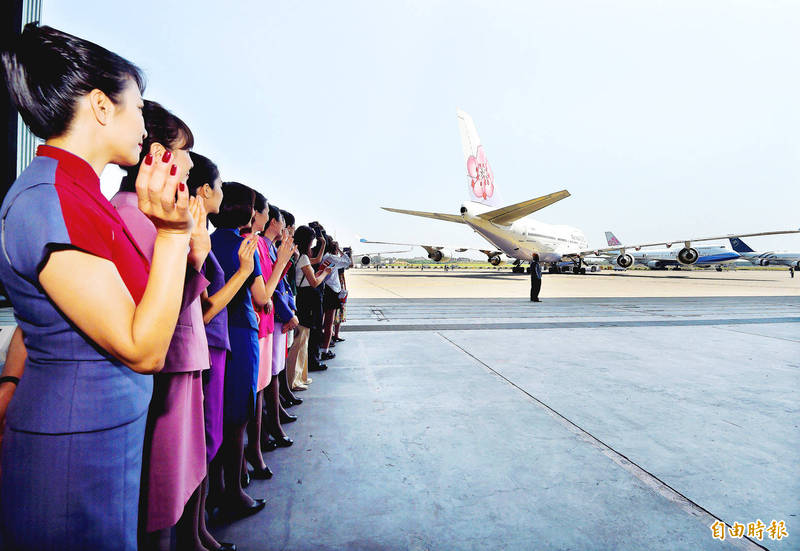 China Airlines Ltd （CAL, 華航） yesterday bid farewell to its last four Boeing 747-400 planes, ending the era of the “Queen of the Skies” at the airline.

CAL has since 1975 operated a total of 29 747 series aircraft manufactured by Boeing Co.

The B-18215 was the last of the passenger model produced by Boeing, making the 16-year-old aircraft the world’s youngest 747-400, CAL chairman Hsieh Shih-chien （謝世謙） told an event to bid farewell to the planes at Taiwan Taoyuan International Airport.

“Although we loved the ‘Queen of the Skies,’ it is time to say goodbye. As the 747-400 jet’s energy efficiency is 22.5 percent lower than new-generation planes, such as the Boeing 777, 747-400 jets are not competitive amid a high oil price environment,” Hsieh said.

The airline last month operated a farewell flight, in which the B-18215 flew for the last time under the CAL banner.

CAL had already retired the other 15 747-400s and it would assign an asset management company to oversee the sale of the final four jets, Hsieh said on the sidelines of the event, adding that the company began depreciating the four jets in 2017.

“A plan to find final buyers for the four planes has not been finalized, while it is also likely that the jets would be disassembled for component sales,” CAL senior vice present Chen I-chie （陳亦傑） said.

The company has yet to calculate the potential disposal gains from the planes, Chen said.

CAL plans to receive its first Airbus A321neo passenger jets in September, Hsieh said, adding that the planes would have higher energy efficiency and help the company reduce its cost per unit.

“We hope the air travel business will begin to recover in the second half of this year, due to progress in COVID-19 vaccinations worldwide. Meanwhile, we will rely on our 21 cargo jets to gain more cargo revenue to weather the pandemic,” Hsieh said.

About 330 people attended the farewell event, including former CAL pilot Robin Kao （高稚仲）, who had flown 747-400 aircraft for five years before retiring.

“It was an honor to fly the iconic jumbo jet, the largest airplane in the market,” he said.