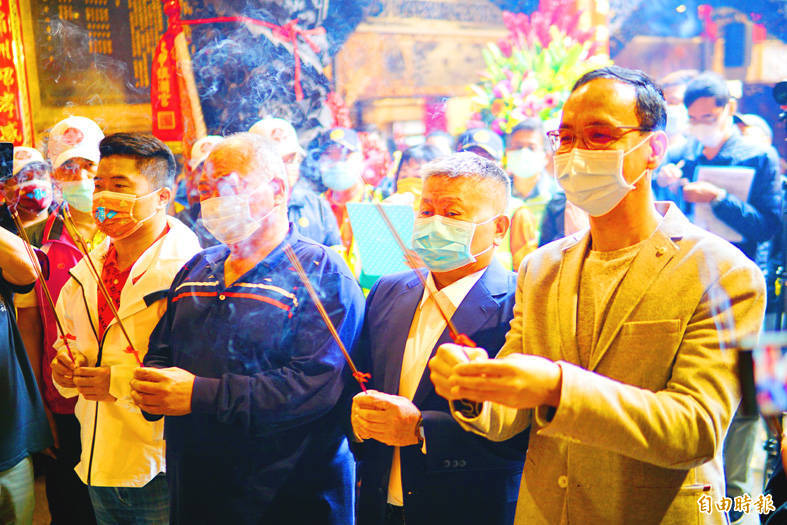 By Yan Hung-chun and Sherry Hsiao / Staff reporters, with CNA

The Republic of China （ROC） has always supported democracy and freedom, and maintaining friendly US relations is the consensus of Taiwanese, former Chinese Nationalist Party （KMT） chairman Eric Chu （朱立倫） said yesterday in response to new US guidelines on interactions with Taiwanese officials.

Chu made the remarks on the sidelines of the annual Dajia Matsu Pilgrimage in Changhua County in response to media queries on whether he considered himself “pro-US” after the US Department of State on Friday announced new rules that “liberalize guidance on contacts with Taiwan.”

As the ROC has always supported democracy and freedom, “being pro-US or supportive of all democratic and free nations is what we must do,” Chu said, citing as an example EU nations and the UK. “This is not me playing this [pro-US] card. It is the consensus of the nation.”

Besides the ability to uphold democracy and freedom, the KMT hopes for peace across the Taiwan Strait, Chu said, calling it the “biggest proposition” of the party, which he led from January 2015 to January 2016.

Asked whether he would run for KMT chairman in the July party election, Chu said that when it came to politics, it is not necessary to occupy certain positions, “but to really do things well.”

Asked by reporters whether he thought Han running for KMT chairman would threaten his chances of re-election, Chiang said: “I have not thought so much” about the prospect.

When asked who he would support in the KMT chairperson race, Lien said: “I support myself.”

Asked whether that meant he would run for the position, Lien added: “I support myself in continuing to fight for the KMT.”

Chu, Han and Lien are each seen as likely contenders in the KMT chairperson election.

Chiang on Feb. 20 announced that he would seek re-election, while Lien last month said he would “seriously consider” running for the post.