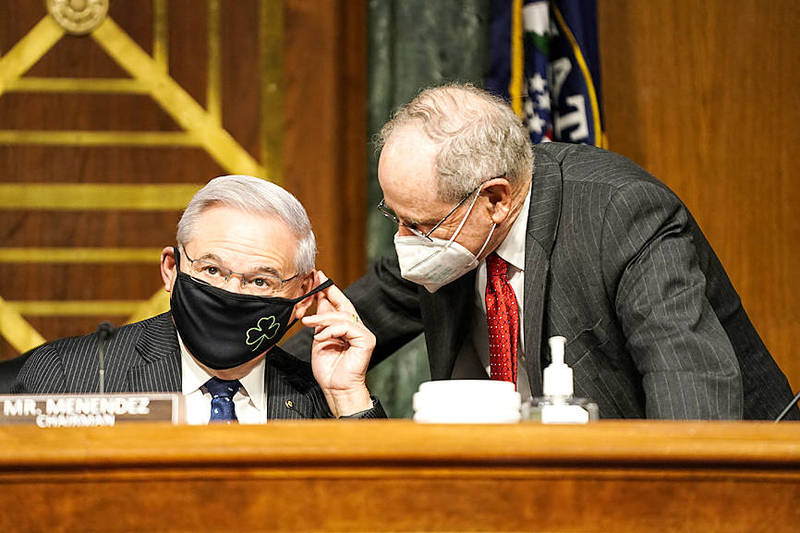 US senators on Thursday unveiled broad legislation on China that would step up pressure over Beijing’s alleged theft of intellectual property and solidify US ties with Taiwan.

In a rare bipartisan initiative in the polarized US Congress, the top Democrat and Republican on the Senate Foreign Relations Committee together presented the strategic competition act, which aims to govern the fraught US relationship with Beijing.

“The United States government must be clear-eyed and sober about Beijing’s intentions and actions, and calibrate our policy and strategy accordingly,” said US Senator Bob Menendez, the Democrat who leads the committee.

The act describes sanctions as “a powerful tool” for the US and voices concern that the executive branch “has not fully implemented” measures already approved by Congress.

If passed, the act would require the secretary of state to issue an annual list of all Chinese state-owned companies that have benefitted from intellectual property theft that hurt any US company or sector.

It would also reaffirm strong US support of Taiwan, which has historically enjoyed wide bipartisan backing in Congress.

The legislation would require the US to use “the same nomenclature and protocol” in dealing with Taiwan as with any foreign government, although it would maintain that Washington recognizes only Beijing.

The US must retain “credibility as a defender of the democratic values and free-market principles embodied by Taiwan’s people and government,” the act said.

It would also seek assessments on rape, forced abortion and other gender-based violence against Uighurs, in addition to previously required reporting on incarceration and other mistreatment of the mostly Muslim people.

Rights experts say that more than 1 million Uighurs and other minorities have been rounded up in the western region of Xinjiang in a campaign the US describes as genocide.

Beijing says that it is providing vocational training to reduce the allure of Islamic extremism. Beijing also denies US allegations of rampant theft of intellectual property.