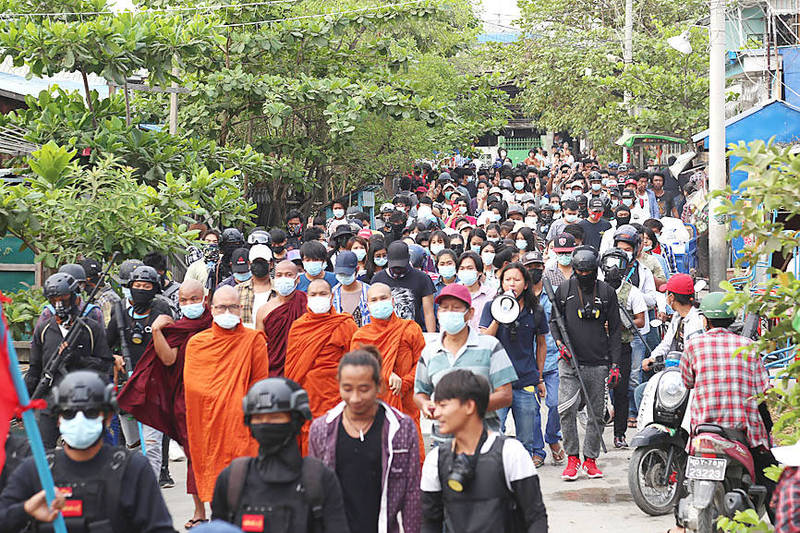 Demonstrators march during a protest against a military coup in Mandalay, Myanmar, yesterday. Photo: EPA-EFE

TAKING A STAND: With thousands of Burmese migrants and immigrants in Taiwan, the nation has a responsibility to denounce the violent crackdown, a legislator said

By Chien Hui-ju and Jonathan Chin / Staff reporter, with staff writer and CNA

The Legislative Yuan yesterday passed a resolution to support an effort by the international community to restore democracy and human rights in Myanmar, while urging the country’s military to end the violence against unarmed protesters.

The legislative caucuses of the Democratic Progressive Party （DPP） and New Power Party （NPP） separately proposed resolutions to call for democracy in Myanmar, which lawmakers then reconciled through a motion to amend.

The resolution, which gained cross-party support, stated that Myanmar’s military should resolve the conflict through peaceful and rational dialogue aimed at restoring democracy as soon as possible.

The Burmese military’s use of force against protesters has resulted in many deaths and injuries, the resolution said.

The UK, US and several EU member states have imposed sanctions on Myanmar in response to the violence, it added.

“As a country that loves democracy, freedom and peace, Taiwan cannot accept the military of Myanmar’s use of armed force against civilians and its trampling of human rights,” it said.

The legislature also demands that the government do more to protect Taiwanese residing in Myanmar and to make better use of Taiwanese businesspeople in the country as a conduit for information and relief, it said.

Humanitarian visa extensions should be made available to Burmese living in Taiwan until the end of the crisis, the resolution said.

“We believe Taiwan can play a more active role in the democratization of the world,” DPP Legislator Hung Sun-han （洪申翰） said.

“The junta in Myanmar has killed nearly 600 civilians and arrested nearly 3,000 people, and the situation continues to deteriorate even now,” he said. “The actions of the Burmese military have been widely condemned by the international community.”

Taiwan is home to tens of thousands of Burmese and Taiwanese have significant investments in the country, he said.

“Taiwan has a responsibility to unequivocally denounce the junta’s violent crackdown on dissent and give the greatest possible aid to Burmese, who are striving to be free,” he said.

NPP Legislator Chen Jiau-hua （陳椒華） said her party became concerned by the situation in Myanmar earlier this year and it has been carrying out a social media campaign to raise awareness.

“The party stands in support of the values of democracy and human rights, and it strongly condemns the military’s indiscriminate killings,” she said. “The violence must stop and peaceful dialogue must begin.”