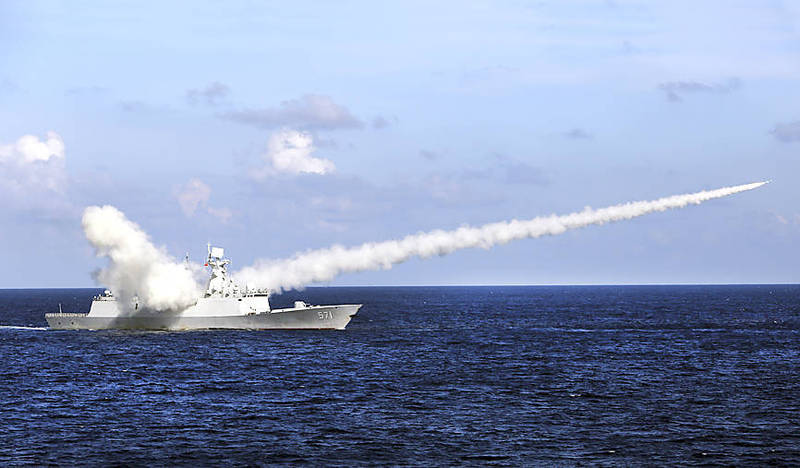 The Chinese missile frigate Yuncheng launches an anti-ship missile during a military exercise in the waters near China’s Hainan Island on July 8, 2016. Photo: Zha Chunming / Xinhua via AP

AIMED AT TAIWAN? Institute for National Defense and Security Research research fellow Ou Si-fu said chips can be ‘bought off the shelf’ and then used in weapons

The Ministry of Economic Affairs （MOEA） yesterday said that chips from Taiwanese semiconductor companies were not making their way into Chinese missiles “to the best of our knowledge.”

“According to our understanding, none of the end uses for those products was military,” she added.

“To the best of our knowledge, TSMC’s exports not only meet Taiwanese standards, they also comply with applicable US regulations,” Wang said. “If information emerges that shows differently, we will of course investigate.”

Given the high volume of chip exports from Taiwan, the Bureau of Foreign Trade would educate exporters more to ensure that Taiwanese and international regulations are being followed, Wang said.

“TSMC has a rigorous export control system in place, including a robust assessment and review process on shipments to specific entities that are subject to export control restrictions,” the chipmaker said in an e-mailed response to the report.

“Moreover, TSMC has put in place processes to help identify abnormal circumstances in a transaction with due-diligence follow-up. With these processes already in place, we are not aware of a product manufactured by TSMC that was destined for military end-use, as alleged in the coverage,” it said.

The Washington Post article cites Ou Si-fu （歐錫富）, a research fellow at the Institute for National Defense and Security Research （國防安全研究院）, as well as an anonymous analyst.

Ou told the Taipei Times by telephone that he cannot speak specifically in regards to Phytium, but that the use of Taiwanese chips in Chinese military equipment would be “hard to trace.”

“The problem is that the chips are dual-use technology. They can be bought off the shelf for one application and then used in military equipment that is aimed right back at Taiwan,” Ou said.

Current Taiwanese and US safeguards for preventing Taiwanese chips from ending up in Chinese munitions are inadequate, Ou said, adding that meaningful measures for tightening up the flow of chips to China must come from the US.

“The US is ultimately in control of the upstream technology and equipment for the chips, even though Taiwan is the manufacturer,” Ou said. “They must be the ones to crack down.”

When asked whether Taiwanese can simply choose not to sell advanced chips to China, Ou said that it was unlikely.

“It would be asking them to voluntarily make less money and offend the Chinese at the same time,” Ou said.