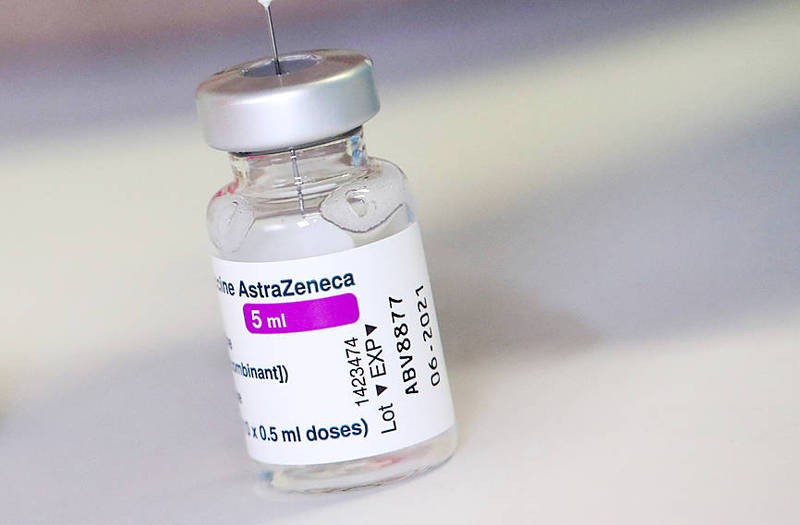 A vial of the AstraZeneca vaccine is pictured at a vaccination center in Ronquieres, Belgium, on Tuesday. Photo: Reuters

Those needing to travel abroad should be able to buy a COVID-19 vaccine by the end of this month at the earliest, pending an official announcement next week, Centers for Disease Control Deputy Director-General Chuang Jen-hsiang （莊人祥） said yesterday.

An expected 5,000 to 10,000 doses of the AstraZeneca vaccine are to be set aside for purchase by those with a specified need to travel, said Chuang, who is also the Central Epidemic Command Center’s （CECC） spokesman.

Whether doses would be limited to business travelers or could include leisure travelers needs further discussion, he said, adding that a vaccination timeline is to be announced next week at the earliest.

The nation has thus far received two batches of the AstraZeneca vaccine.

CECC figures showed that only about 20,000 people had received the vaccine as of Wednesday.

To speed up vaccinations, the CECC on Wednesday announced that all those in the first, second and third priority groups would be eligible to receive a vaccine from Monday next week.

This is to include frontline health and port-of-entry workers, caregivers, certain government officials, rescue workers, flight crews, “disease prevention” taxi drivers and others at relatively high risk of infection.

After eligibility is expanded, the center is to discuss opening up the rollout list to those in the fourth priority group, which includes diplomats and others with a need to travel, Chuang said.

As for concerns over the safety of the AstraZeneca vaccine, Chuang said that it is currently the only one available in Taiwan, although the Moderna vaccine is to be available from next month.

A local vaccine is likely to be available after July, while additional doses through the COVAX global vaccine-sharing program are under discussion, he said.

The center is deeply concerned about safety, Chuang said, adding that it would gather experts to conduct rolling safety reviews.