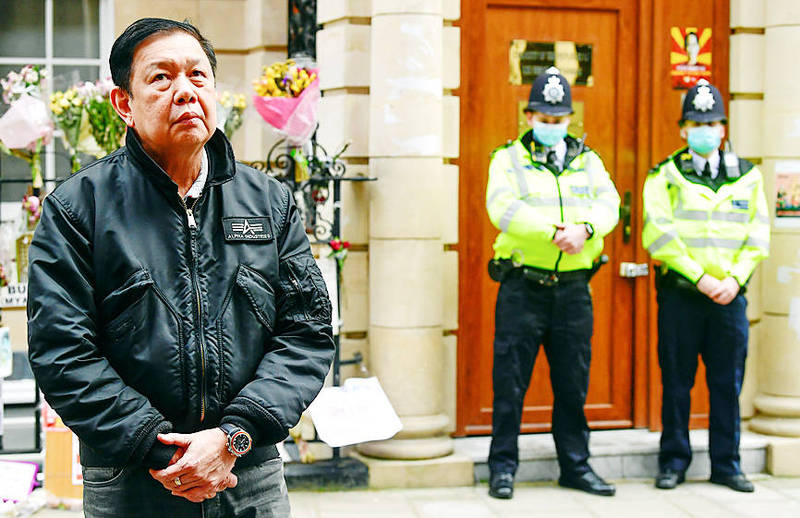 Burmese Ambassador to London Kyaw Zwar Minn stands outside the Burmese embassy in London yesterday after being locked out. Photo: Reuters

Britain yesterday condemned “bullying” by the Burmese military after the Burmese ambassador to London was ousted in an extraordinary diplomatic coup after calling for the release of Burmese State Counselor Aung San Suu Kyi.

Diplomats loyal to the Burmese military authorities on Wednesday seized control of the embassy, leaving Burmese Ambassador to London Kyaw Zwar Minn locked out in the street.

The ambassador said that the defense attache had taken over the mission in “a kind of coup,” two months after the military seized power in Myanmar.

Daily protests demanding a return of democracy have rocked the country and brought a brutal response from the armed forces, with almost 600 civilians killed, a local monitoring group said.

The coup prompted several high-profile diplomatic defections, including the country’s ambassador to the UN.

British Secretary of State for Foreign, Commonwealth and Development Affairs Dominic Raab posted on Twitter his support for the ambassador, who spent the night in his vehicle outside the embassy.

“We condemn the bullying actions of the Myanmar military regime in London yesterday, and I pay tribute to Kyaw Zwar Minn for his courage,” Raab wrote. “The UK continues to call for an end to the coup and the appalling violence, and a swift restoration of democracy.”

The Burmese authorities had given official notice of Kyaw Zwar Minn’s termination as ambassador and in line with diplomatic policy, so the government had no choice but to accept it, UK sources said.

On Wednesday evening, protesters gathered outside the mission with the ousted ambassador, who told the Daily Telegraph that “when I left the embassy, they stormed inside the embassy and took it.”

Asked who had taken over, he said: “Defense attache — they occupy my embassy.”

The Times quoted the ambassador as saying that the defense attache had sought to install his former deputy as charge d’affaires.

The Burmese authorities did not respond to a request for comment on the incident.

International powers have voiced anger and dismay at the junta’s brutal approach, but the UN Security Council has stopped short of considering sanctions, with China and Russia opposing the move.

A group representing the ousted civilian government on Wednesday began talks with UN investigators, saying that it had gathered more than 270,000 pieces of evidence showing rights abuses by the junta.