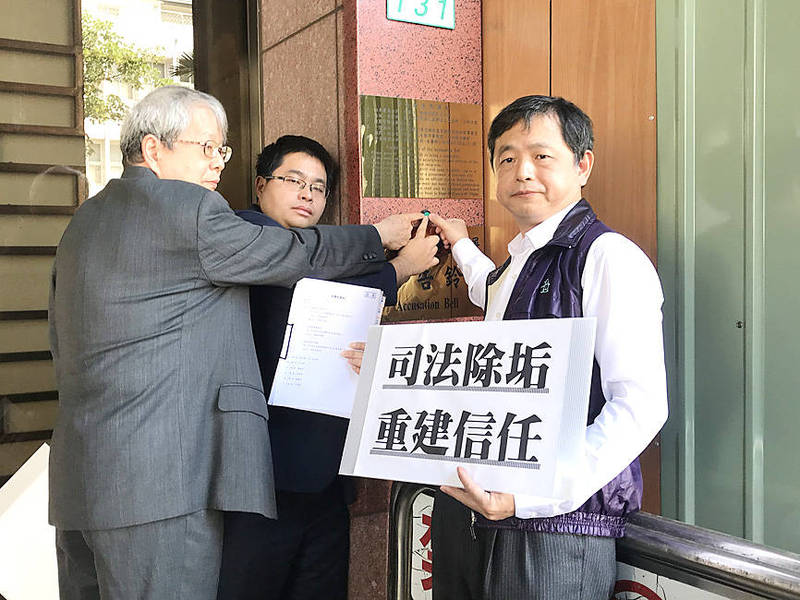 STATUTE OF LIMITATIONS: The Human Resource Review Committee said the alleged misdeeds of 25 judges suspected of corruption took place too long ago

The investigation into the Weng Mao-chung （翁茂鍾） case would hold all judicial personnel involved accountable to the strictest interpretation of the law, Judicial Yuan President Hsu Tzong-li （許宗力） said yesterday, while pledging more action against misconduct to uphold the judiciary’s credibility.

Hsu pledged to investigate the few judges who might be contravening laws to protect the work of honest judges and uphold the dignity of the judiciary.

Weng, president of Chia Her Industrial Co （佳和）, is accused of bribing 40 to 50 judicial workers, judges and prosecutors to obtain non-guilty or lighter sentences in four criminal cases.

Weng allegedly gave them shirts and arranged expensive banquets for them.

Shih, who until 2017 served as a Supreme Court judge, did not recuse himself from cases involving Weng and allegedly provided Weng with legal advice, investigators from the Judicial Yuan and Ministry of Justice said.

The ministry’s Human Resource Review Committee yesterday said that 26 judges should be punished for their involvement in the case, but only Supreme Administrative Court Judge Cheng Hsiao-kang （鄭小康） is suspected of breaching Article 51 of the Judges Act （法官法）, and his case has been forwarded to the Control Yuan.

The committee said that the other 25 judges could not be punished due to the statute of limitations.

Cheng is the eighth judge whose case has been forwarded to the Control Yuan.

Three former grand justices were investigated by the Council of Grand Justices Disciplinary Committee and found innocent, the ministry said.

The committee cleared 23 judicial workers and prosecutors of wrongdoing due to a lack of documentation or credible evidence, or because their actions were within the parameters of normal social interaction.

Minister of Justice Tsai Ching-hsiang （蔡清祥） at 6pm yesterday held a news conference stating that four prosecutor-generals and 10 prosecutors are also under suspicion, and they are being investigated.

Former minister of justice Tseng Yung-fu （曾勇夫）, who at the time being investigated was serving as chief prosecutor at the Taiwan High Prosecutor’s Office, is suspected of having accepted gifts and attended multiple banquets held by Weng, and is being investigated, Tsai said.

The Legislative Yuan’s Judiciary and Organic Laws and Statutes Committee, which on March 11 convened a panel to investigate the case, yesterday said that it would, from today, begin discussing what documents to look into.

The panel said it would focus on the administrative investigations conducted and invite agencies to attend panel meetings.