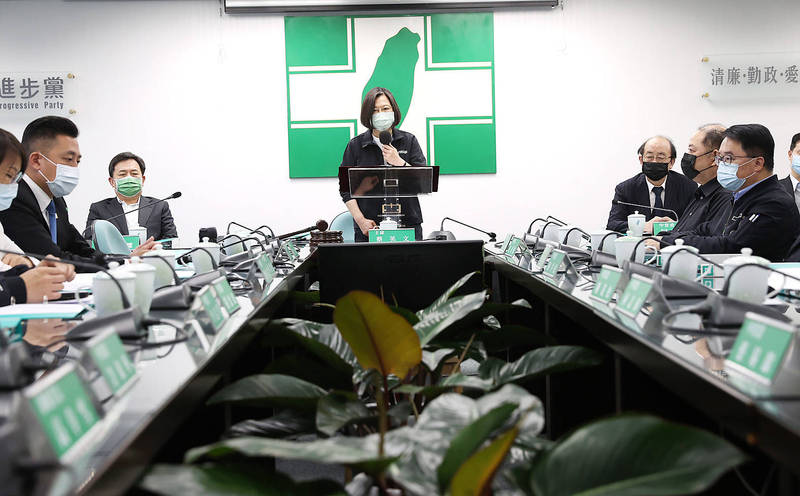 ‘UNSHIRKABLE’: President Tsai Ing-wen said instilling a safety-centric mindset and safety standards among construction workers is of the utmost importance

President Tsai Ing-wen （蔡英文） yesterday laid out three major areas of reform for the Taiwan Railways Administration （TRA） following Friday last week’s fatal train crash, saying that there is no need to doubt the government’s determination, as reforming the agency is its “unshirkable responsibility.”

Tsai made the remarks in a speech ahead of a Democratic Progressive Party Standing Committee meeting, during which she observed a minute’s silence for the victims of the Taroko Express crash, which killed 50 people and injured more than 200 after colliding with a truck as it was about to enter the Cingshuei Tunnel （清水隧道） in Hualien’s Sioulin Township （秀林）.

The accident “has affected everyone in the nation,” she said.

“Everyone is mourning the passengers who lost their lives and are dismayed at the death of the young conductor,” she said, adding that because of this, “reforming the TRA is imperative.”

The three main tasks are to solve problems in the agency’s organizational culture, fix its longstanding financial woes and discuss the best business model moving forward, the president said.

Organizational adjustments would ensure that issues could be solved regionally, thereby increasing management efficiency and safety, she said.

For example, each of the four major work units essential for running the railways should be able to communicate horizontally among themselves, rather than going through a superior, she said.

As many have mentioned, instilling a safety-centric mindset and safety standards among construction workers is of the utmost importance, she added.

No matter the agency’s business model, if management and safety issues are left unsolved, then the public’s expectations would remain unmet, Tsai said.

Fixing the agency’s financials is next on the agenda, Tsai said.

The TRA operates many unprofitable rail lines for the public good, causing it to consistently run at a loss, she said.

Add to that worker pensions, asset activation and other expenses, and it adds up to a huge financial burden that harms not only worker morale, but also operational efficiency and safety, she added.

Without a stable profit, any other reforms could face resistance, she said.

If management and safety can be improved and financial troubles eased, then there would be more space to discuss the best long-term business model for the TRA, she added.

Many reforms have been initiated, but before their effects are seen, it is difficult to avoid criticism, Tsai said, but added that people should not doubt the government’s resolve.

The fruits of government policy over the past five years are slowly becoming tangible, “proving that we have never been afraid to approach difficult reforms,” she added.

“When it comes to the TRA, our view is much the same,” Tsai said. “People everywhere in Taiwan deserve to have a safe path home. Reforming the agency is our unshirkable responsibility.”

Meanwhile, the Taiwan Railway Labor Union said it is glad to see the president show determination in conducting comprehensive reform of the TRA.

“We will see how determined the government is in reforming the agency,” the union said.

“We absolutely support reasonable reform, but the government should not think that turning the TRA into a private or state-run corporation would serve as an all-inclusive solution to all of the problems,” it added.