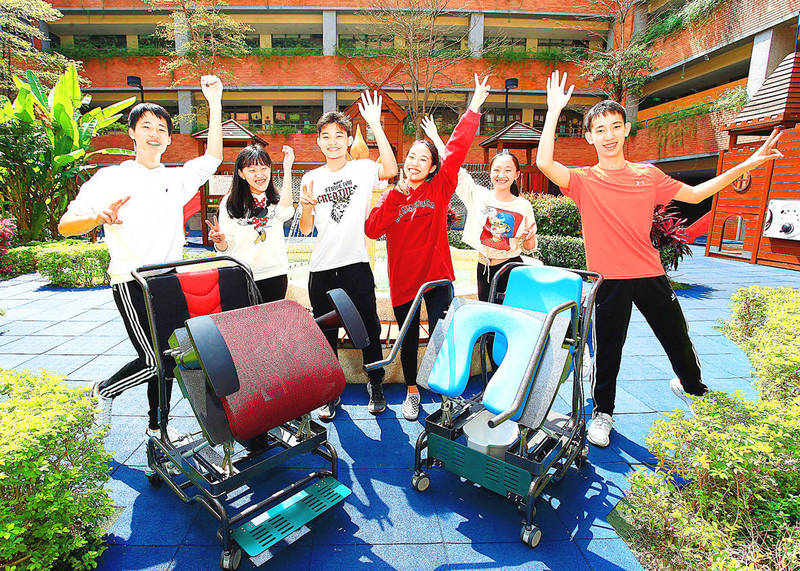 Students from Taipei Fuhsing Private School pose for a photograph with electronic height-adjustable toilet seats that won a gold medal at this year’s Moscow International Salon of Inventions and Innovative Technologies. Photo courtesy of the Chinese Innovation & Invention Society

The competition, held from March 23 to 26, was joined remotely by international participants due to the COVID-19 pandemic, the organizer said, adding that the Taiwanese team entered 48 inventions, and placed second overall behind the host, Russia.

One of team’s gold-winning inventions was a material that breaks down naturally and can be used to make masks.

The material — made in response to the environmental impact of non-biodegradable masks, which have grown prevalent due to the pandemic — was developed by students at the National Yunlin University of Science and Technology, led by professor Nien Yu-hsun （粘譽薰）.

Another gold-winning invention — developed by students at National Chin-Yi University of Technology, led by professor Chen Tsung-chia （陳聰嘉） — was a battery-less “powered” bicycle.

“It takes less force to propel and is lighter than an electric bicycle. The concentration and release of force is all done mechanically,” Chen said.

The bicycle is pedaled manually like a regular bicycle, but its mechanical structure stores energy from rotation of the paddles, as well as the vibrations generated when riding, and uses it to propel the bicycle forward, he said.