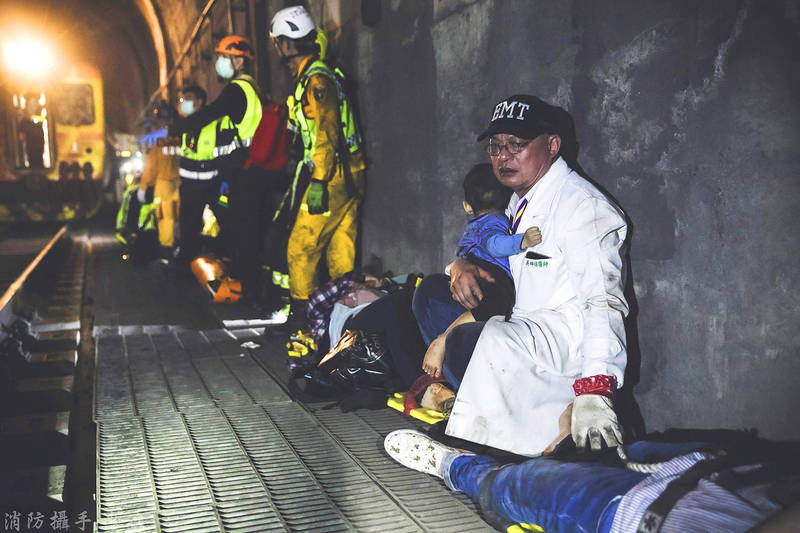 Doctors yesterday called on first responders to care for their mental health and watch for signs of post-traumatic stress disorder （PTSD）, as rescuers continue to handle the aftermath of Friday’s train derailment in Hualien County.

The crash was the nation’s worst rail tragedy in decades, killing 50 and injuring 200 as of yesterday after the Hualien District Prosecutors’ Office revised the death toll down from 51 following DNA testing.

Taroko Express No. 408 was traveling from New Taipei City to Taitung when it crashed inside the Cingshuei Tunnel （清水隧道） in Hualien’s Sioulin Township （秀林） after hitting a crane truck that had slid down onto the tracks from a nearby work site.

It is not uncommon for front-line responders to begin having nightmares or intrusive flashbacks, both symptoms of acute stress disorder, Lin said.

If these symptoms persist more than a month after the event, it could develop into PTSD, Lin said, adding that more than 60 percent of those who experience a major traumatic incident develop the condition.

This might present as avoidance, he said, giving as examples that train crash survivors might refuse to ride a train or earthquake survivors might avoid the disaster area.

Those experiencing related symptoms or witnessing it in others are advised to seek psychiatric assistance, Lin added.

The suicide of an Yilan County firefighter surnamed Hsueh （薛） in 2019 drew attention to this issue, as it was largely considered to be related to the PTSD that he developed after responding the year before to the Puyuma Express derailment, which killed 18 and injured 291.

Police officers are not exempt from the risk, as they faced considerable stress redirecting traffic, securing the crash site and hearing families identify victims.

National Police Agency Director-General Chen Ja-chin （陳家欽） after arriving to the scene on Saturday urged the Hualien County Police Department to focus on officers’ mental health, and to provide sufficient time and space for rest.

Hualien City Precinct Chief Hao Hsin-cheng （郝心誠） yesterday said that many officers have been working around the clock, and pledged to invite medical and psychiatric professionals to help after they return to their normal schedules.

PTSD symptoms can become more intense during times of stress or when reminded of the event, Hualien Tzu Chi Hospital said, advising those who experience extreme or long-term symptoms to seek help.

The Hualien County Government said that it has set up counters at Hualien Railway Station and the city morgue for psychological assistance, and has integrated resources from county psychiatric associations to help those affected.

On Saturday, Democratic Progressive Party Legislator Fan Yun （范雲） passed along advice from counselors on how parents can help their children process the tragedy.

“From yesterday to now has been very emotionally challenging and I know everyone is feeling the same,” she wrote on Facebook. “Thank you to the Hualien Counseling Psychologists’ Association for providing this information, so we can help everyone who was on the train through this difficult time.”

The association recommended that parents refrain from repeatedly watching news or videos of the derailment, but instead focus on caring for themselves and their children.

They should also calmly and simply explain to their child what happened in an age-appropriate manner, if there is a need to do so, it said.

Speaking honestly about how one is feeling is very important, it said, adding that it is entirely normal to feel affected, but that additional care should be sought if such feelings persist after two weeks.

Parents and their children should take steps to improve their mood if melancholy persists, such as seeking religious consolation, exercising more, seeing family friends or engaging in relaxing activities, it said.