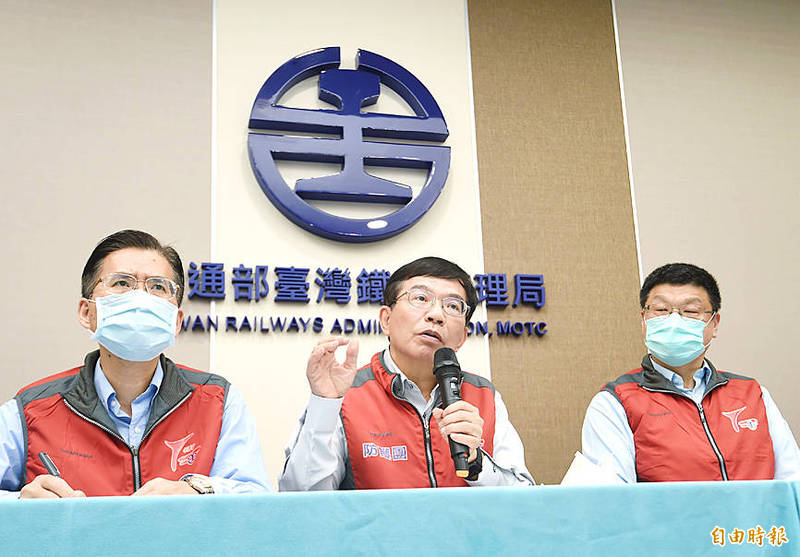 MAKING CHANGES: A Minister of Transportation and Communications official called for fences and safety nets at construction sites to prevent another incident

The Taiwan Railways Administration （TRA） is to inspect all construction sites near railways following a train crash in Hualien County that killed at least 51 people, the agency said yesterday.

TRA Deputy Director-General Du Wei （杜微） made the announcement in the wake of the incident, which occurred when a Taroko Express train crashed inside Cingshuei Tunnel （清水隧道） after hitting a crane truck near the tunnel’s entrance.

The vehicle had slid down a hill to the tracks from a nearby TRA construction site.

The agency is investigating rail-side operations since the accident, Du told a news conference in Taipei.

The TRA had previously requested that construction at all sites near railways be halted over the Tomb Sweeping Day holiday, he added.

The TRA is inspecting all sites where the railway could possibly be obstructed, and these projects would be halted until they meet the agency’s standards, he said.

It is also investigating the reason the construction project near the site of the train crash had been delayed to the end of next month when it was to be completed by Jan. 20, he added.

Safety nets and fences should be erected at all construction projects near areas with weak infrastructure or a slope, Wang said, adding that he would discuss the issue with TRA officials.

All parties accountable for the incident would be held responsible and the construction company, as well as any affiliated contractors, would be asked to remunerate the victims or their families per their contractual obligations, Du said.

The agency would look into revising its policy on allowing ticket sales for standing passengers, Wang said, adding that it does not yet have enough information to make such a decision.

The TRA allows 15 standing passengers per carriage on Taroko Express trains, which it permitted after trials as it is popular among travelers, it said.

The TRA will compare the list of victims with its records of non-seated tickets sold to try to establish whether standing passengers were at greater risk for injury, Du said.

Meanwhile, an image of an internal chat group among TRA employees was yesterday leaked to media. Messages in the chat indicated that some staff had suggested that the agency blame the construction company for the incident.

The TRA confirmed that some people had suggested such tactics, but the agency had not adopted the measures.

The TRA will shoulder any responsibility that it should rightly shoulder, Du said.