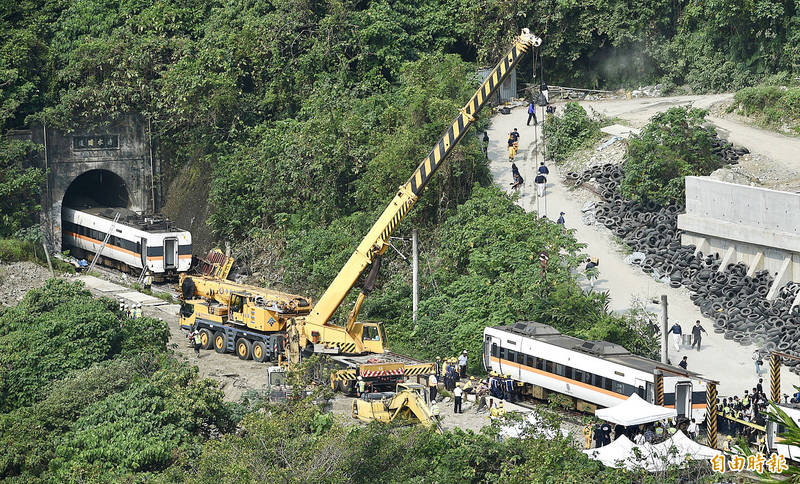 FLIGHT RISK? The driver of the truck that slid onto the tracks, causing the crash, was released on NT$500,000 bail, but prosecutors have requested that he be detained

By Lee Hsin-fang and Jason Pan / Staff reporters, with CNA

Premier Su Tseng-chang （蘇貞昌） yesterday listed three priorities in response to the deadliest accident involving a Taiwan Railways Administration （TRA） train in the past 40 years: rescuing the injured, clearing the single-track tunnel and assisting the families of the victims.

Taroko Express No. 408, traveling from New Taipei City to Taitung on Friday morning, derailed as it entered the Cingshuei Tunnel （清水隧道） in Hualien’s Sioulin Township （秀林）.

Of the 496 people on board, including four TRA personnel, 51 had died and 188 were injured as of 7pm yesterday, after the train hit a crane truck that had slid down a slope from a work site onto the rails, the TRA said.

The premier said that priority must also be given to compensation claims by families of the victims, Lo added.

Government agencies are in the process of expediting DNA testing to assist families in identifying their loved ones, and the National Police Agency has been instructed to help victims’ families transport the bodies, Lo said, adding that the transportation fees would be covered by the TRA.

The Ministry of Transportation and Communications said that the crane truck blamed for the accident was suspected to have rolled onto the track within 15 minutes of the Taroko Express’ arrival.

The ministry came to the conclusion as another train bound for Hualien had passed the same spot at 9:13am, before the Taroko Express hit the truck at 9:28am, Deputy Minister of Transportation and Communications Wang Kwo-tsai （王國材） said.

That piece of information could help the investigation, as no surveillance footage was found on site, he said.

The rescue mission is continuing, the National Fire Agency said, adding that there might be more bodies in cars No. 3 and 6.

Wang said that cars No. 1 and 2, the last two carriages in the eight-car train, have been towed away, while the removal of car No. 3 would take some time, as the track was seriously damaged.

The first five carriages of the train derailed and piled up in the narrow, single-track tunnel, the ministry said.

While investigations continue, it is likely that the crane truck, which had been parked on a hill above the track, slid onto the track as its emergency brake was not properly engaged, the Taiwan Transportation Safety Board said.

The Hualien District Court released the truck’s driver and site supervisor, Lee Yi-hsiang （李義祥）, on NT$500,000 （US$17,524） bail, but he was restricted from travel.

Prosecutors have filed a request that Lee be detained, saying he poses a flight risk, and he could destroy evidence or transfer company assets to evade paying compensation.

Investigators found that Lee had obtained 19 government contracts in the past five years worth a total of NT$200 million.

A Republic of China flag, center, outside Taipei Main Station is flown at half mast yesterday in remembrance of the victims of Friday’s train crash in Hualien County’s Sioulin Township. Photo: Wang Yi-sung, Taipei Times