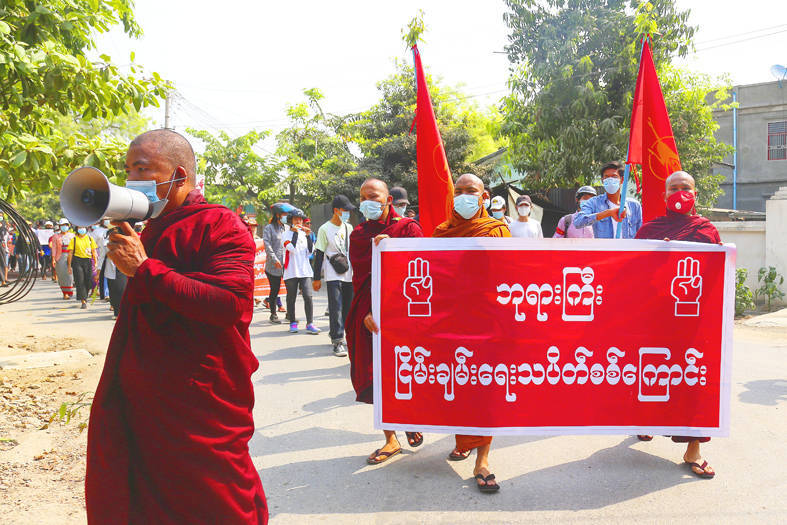 Demonstrators hold a banner that reads: “PhaYarGyi Peace Strike Troop” during a protest against the military coup in Mandalay, Myanmar, yesterday. Photo: EPA-EFE

Myanmar’s wireless broadband Internet services were yesterday shut down by order of the military, local providers said, as protesters continued to defy the threat of lethal violence to oppose the junta’s takeover.

A directive from the Burmese Ministry of Transport and Communications on Thursday instructed that “all wireless broadband data services be temporarily suspended until further notice,” according to a statement posted online by local provider Ooredoo.

After weeks of overnight cutoffs of Internet access, the military shut all links apart from those using fiber optic cable. Access to mobile networks and all wireless — the less costly options used by most people in Myanmar — was blocked.

The government has shut down all but a handful of fully military-controlled media outlets. Some of those banned or whose operations have been suspended have continued to publish through social media or whatever methods they can find.

Facebook announced it was providing a safety feature to enable users in Myanmar to beef up security settings locking their profiles to prevent access by “non-friends.” That includes preventing unapproved users from enlarging, sharing or downloading full-size profile and cover images and seeing any posts on a person’s timeline.

Facebook and other major social media platforms have banned members of the Burmese military and are blocking ads from most military-linked commercial entities.

A South Korean bank temporary closed its Yangon branch and was considering bringing its South Korean employees home after security forces fatally shot one of its Burmese employees, it said.

Shinhan Bank spokesperson Noh Ji-young said the woman was shot in the head while commuting home from work in a company car on Wednesday and was pronounced dead yesterday.

With its economy contracting under pressure from mass disruptions in reaction to the coup and from the COVID-19 pandemic, Burmese military leaders are expected to order an increase in the money supply by the central bank. It was unclear how much of an impact the German company’s move would have.

Human Rights Watch yesterday issued a report saying that the military has forcibly “disappeared” hundreds of people, including politicians, election officials, journalists, activists and protesters, and refused to confirm their location or allow access to lawyers or family members in breach of international law.