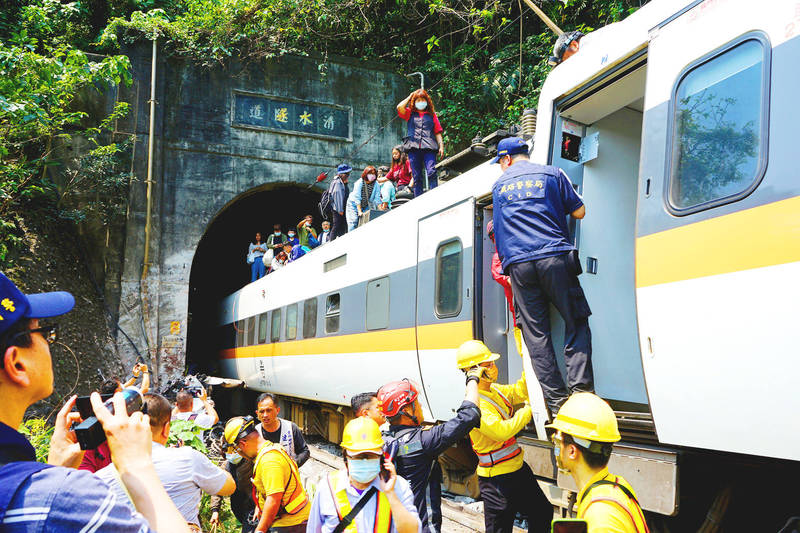 Passengers on a train that was derailed in Hualien yesterday leave the train by walking on the roof. Photo: CNA

SEEKING ANSWERS: Police were questioning the vehicle’s driver, who was not in the truck at the time of the incident. He was the supervisor at a nearby work site, the TRA said

At least 50 people were killed yesterday in one of the nation’s worst railway crashes, when a train partially derailed in Hualien County after colliding with a vehicle that had rolled down a hill.

Taroko Express No. 408, which left New Taipei City’s Shulin Railway Station and was expected to arrive at Hualien Railway Station at 9:39am, struck a crane truck at 9:28am as the train was about to enter the Cingshuei Tunnel （清水隧道） in Hualien’s Sioulin Township （秀林）, said the Taiwan Railways Administration （TRA）, which operates the train.

As of press time, 50 people, including the driver and assistant driver, were confirmed dead and 146 injured.

One French national was among those killed, while a Macanese and two Japanese had minor injuries.

With the train partly stuck in the tunnel, people climbed out of windows and walked along the train’s roof to reach safety.

The southbound train of eight cars was about to enter the tunnel when the crane truck slid down a nearby slope, colliding with the train’s No. 8 car just outside the tunnel ingress.

The impact partially derailed the train, which continued into the tunnel before colliding with the tunnel’s interior walls.

The six leading cars piled up in the crash and most fatalities occurred in the No. 7 and No. 8 cars, which were crushed from the impact, the agency said.

Hualien County Police Bureau Commissioner Tsai Ting-hsien （蔡丁賢） confirmed that as of 4pm, police were questioning the truck’s driver, surnamed Lee （李）, who was not in the vehicle at the time of the crash.

Investigators suspect that Lee did not engage the hand brake before parking the vehicle at a worksite servicing a separate TRA rail line on a hill adjacent to the tunnel, he said.

The TRA said Lee should not have been on the site, as all work on that line had been suspended to avoid crews from interfering with train operations over the four-day Tomb Sweeping Day holiday, which began yesterday.

The subcontractor in charge of the work had been informed not to be on site, but Lee, the site supervisor, had apparently decided to inspect the site, the agency said.

Lee’s reason for conducting the inspection on an off-day and for driving about the site in a construction vehicle remains unclear, it added.

Premier Su Tseng-chang （蘇貞昌）, Minister of Transportation and Communications Lin Chia-lung （林佳龍） and Minister of the Interior Hsu Kuo-yung （徐國勇） were at the site of incident.

Su expressed sadness and regret for those killed and their families, while Lin apologized in a statement.

More than 40 countries, including all 15 of Taiwan’s diplomatic allies, expresssed sympathy following the tragedy.

An aerial view of the site of yesterday’s train accident in Hualien shows where the truck that derailed the train slid down a slope. Photo courtesy of a reader

Keelung Fire Department firefighters remove a body from one of the cars after yesterday’s train crash in Hualien. Photo copied by Lin Chia-tung, Taipei Times

Rescuers look for survivors at the site of a derailed train in a tunnel in Hualien County yesterday. Photo: New Taipei City Fire Department / AFP

The Fubon Guardians baseball team observe a minute’s silence for the victims of a train crash in Hualien County yesterday before their game against the CTBC Brothers in New Taipei City. Photo: Chen Chih-chu, Taipei Times