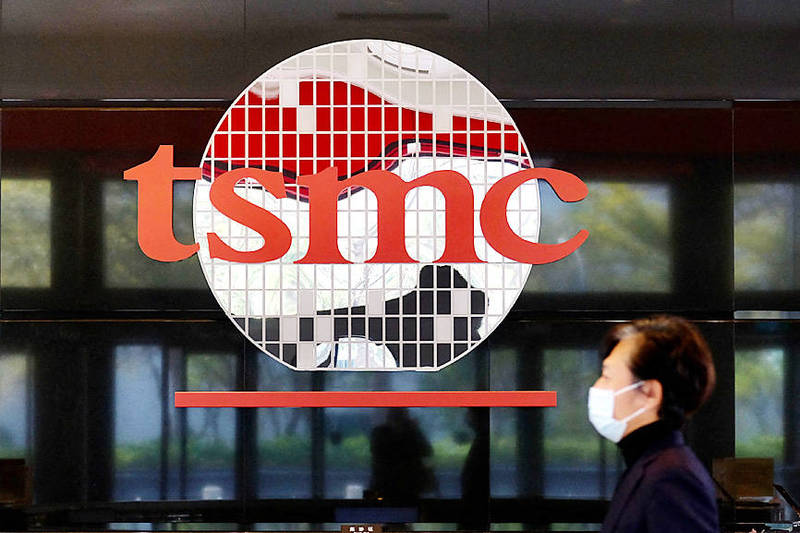 Taiwan Semiconductor Manufacturing Co （TSMC, 台積電） plans to invest about US$100 billion to expand capacity and fund research and development （R&D） of advanced technologies in the next three years to keep up with rising demand, it said yesterday.

“We are entering a period of higher growth as the multiyear megatrends of 5G and HPC [high-performance-computing] are expected to fuel strong demand for our semiconductor technologies in the next several years,” TSMC said in a statement.

In addition, the COVID-19 pandemic has accelerated digitalization, which also drives semiconductor demand, the chipmaker said in the statement.

TSMC has been improving productivity and boosting factory utilization to more than 100 percent over the past 12 months, but has not been able to keep up with demand, Wei said in the letter obtained by the Taipei Times.

The chipmaker is taking more actions to avert future supply crunches, it said.

“TSMC will be building greenfield [new] fabs and expanding existing fabs for both leading-edge and specialty technologies,” Wei said. “We have started hiring thousands of new employees, acquired land and equipment, and started construction of new facilities at multiple sites globally.”

TSMC operates 13 wafer manufacturing factories in Taiwan and China, and is building a new fab in Arizona. Based on the company’s first-phase plan, the US plant would produce 20,000 12-inch wafers per month after it opens in 2024.

TSMC in January budgeted record-high capital expenditure of US$25 billion to US$28 billion for this year, citing technology complexity, technology advancement and high costs of extreme ultraviolet lithography tools.

In the letter, Wei told customers TSMC would suspend wafer price discounts through the whole of next year, starting on Dec. 31.

“We believe that this modest action is the least disruptive option to supply chains so that TSMC can deliver on our mission of providing leading semiconductor technologies and manufacturing capacity in a sustainable manner,” Wei said.

While most chipmakers have hiked prices by 30 or 40 percent to reflect surging raw material costs and volatile foreign-exchange rates, TSMC has tried to keep prices stable.

Separately, United Microelectronics Corp （UMC, 聯電） yesterday said it would invest more to expand capacity at its factories in Tainan over the next 3 years, in addition to the NT$350 billion （US$12.27 billion） it has spent on capital expenditures over the past decade.

UMC is to spend US$1.5 billion on new facilities and equipment this year, mainly on increasing its 28-nanometer chip capacity, it told investors in January.