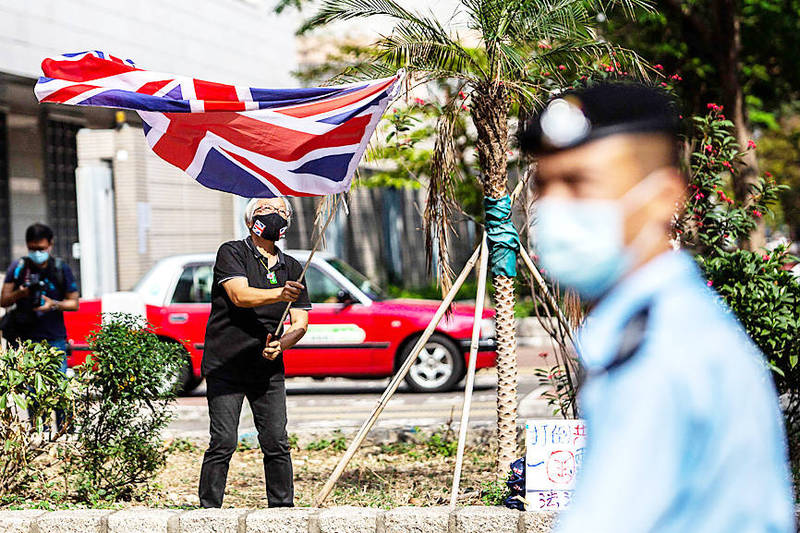 ‘PROFOUND SADNESS’: Calling it ‘shocking and saddening,’ the Executive Yuan spokesman said that Taiwan should cherish its ‘hard-won freedom’

Seven of Hong Kong’s leading democracy advocates, including media tycoon Jimmy Lai （黎智英） and 82-year-old veteran of the movement Martin Lee （李柱銘）, were yesterday convicted for organizing and participating in a march during anti-government protests in 2019 that triggered a crackdown on dissent.

The verdict was the latest blow to the flagging democracy movement as the governments in Hong Kong and Beijing tighten the screws in their efforts to exert greater control over the territory.

Lai, the owner of the outspoken Apple Daily tabloid; Martin Lee, the octogenarian founder of the city’s Democratic Party; and five former pro-democracy lawmakers were found guilty in a ruling handed down by a district judge. They face up to five years in prison. Two other former lawmakers charged in the same case had earlier pleaded guilty.

Six of the seven defendants convicted yesterday, including Lee and Lai, carried a banner that criticized police and called for reforms as they left Victoria Park on Aug. 18, 2019, and led a procession through the center of Hong Kong, the verdict said.

The other defendant — Margaret Ng （吳靄儀）, a 73-year-old barrister and former opposition lawmaker — joined them on the way and helped carry the banner.

Police had given permission for a rally at the park, but had rejected an application from the organizer, the Civil Human Rights Front, for the march.

Organizers estimated that 1.7 million people marched that day in opposition to a bill that would have allowed suspects to be extradited to mainland China for trial.

The Taiwanese government expressed its “profound sadness at, and condemnation of, the ongoing infringements of democracy and human rights in Hong Kong by the authorities in Beijing,” Presidential Office spokesman Xavier Chang （張惇涵） said.

Describing the news as “shocking and saddening,” Executive Yuan spokesman Lo Ping-cheng （羅秉成） said Taiwan should “learn the lesson that its hard-won freedom and democracy must be cherished.”

Former Hong Kong legislator Lee Cheuk-yan （李卓人）, who was among those convicted, said he was disappointed in the verdict, adding that he and his fellow residents have the constitutional right to march.

Lee is known for helping to organize annual candlelight vigils in Hong Kong on the anniversary of the Tiananmen Square Massacre.

“We are firm that we have the right to assemble,” he said. “It is our badge of honor to be in jail for walking together with the people of Hong Kong.”

The defendants are due back in court on April 16, when mitigation pleas are to be heard before sentencing.

Former Hong Kong legislators Cyd Ho, left, and Lee Cheuk-yan speak to the media outside a West Kowloon court in Hong Kong yesterday, after they were found guilty of organizing an unauthorized assembly on Aug. 18, 2019. Photo: AFP