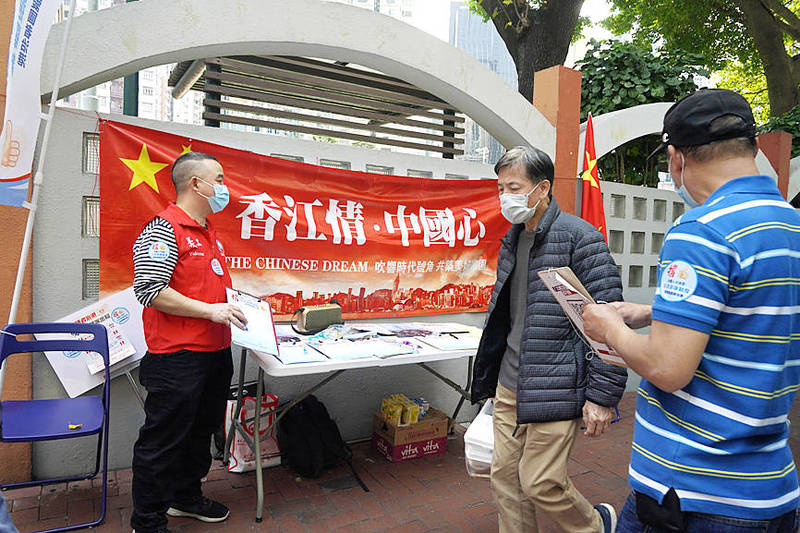 ‘TRUST THE PEOPLE’: The G7 as well as the EU urged Hong Kong officials to restore confidence in political institutions and end unwarranted oppression of advocates

The G7 nations on Friday demanded that China honor commitments to Hong Kong and end “oppression” against democratic advocates after Beijing forced sweeping changes of the territory’s election system.

Beijing’s rubber-stamp parliament on Thursday passed reforms that said that only “patriots” can run the territory, which was guaranteed a separate system for 50 years when the UK handed over control in 1997.

“Such a decision strongly indicates that the authorities in mainland China are determined to eliminate dissenting voices and opinions in Hong Kong,” Canada, France, Germany, Italy, Japan, the UK and the US, as well as the EU, said in a joint statement.

The G7’s top diplomats said they “call on China and Hong Kong authorities to restore confidence in Hong Kong’s political institutions and end the unwarranted oppression of those who promote democratic values.”

“The people of Hong Kong should be trusted to cast their votes in the best interests of Hong Kong. Discussion of differing views, not silencing of them, is the way to secure the stability and prosperity of Hong Kong,” they said.

Separately, Australia and New Zealand said they are deeply concerned, urging Hong Kong and China to allow “genuine avenues” for the territory’s people to participate in their governance, and to protect the role of the Hong Kong Legislative Council.

Meanwhile, Hong Kong’s High Court yesterday released three more advocates on bail, but remanded two in custody in a widely monitored case involving the most sweeping use yet of the security law.

The High Court was ruling on an appeal by prosecutors against a lower court’s decision to grant bail to the five advocates.

Some family members of those denied bail cried after hearing the verdict, including Tam’s wife.

The charges on conspiracy to commit subversion against 47 opposition figures are being closely watched by foreign diplomats and rights groups.

They have raised concerns over the vanishing space for dissent in the territory, which has taken a swift authoritarian turn since the imposition of the law in June last year.

Since the 47 were charged about two weeks ago, the court has heard a series of requests for bail. Although most were rejected, the court approved some applications, prompting immediate appeals from prosecutors.

Eight have been granted bail so far, including yesterday’s three, as prosecutors’ appeals were either rejected or withdrawn.

The bail conditions for the three included not threatening national security, participating in any elections except to vote, or contacting foreign officials, as well as surrendering all travel documents, observing a curfew and reporting to police regularly.

An appeal against granting bail to four others would be heard tomorrow.

The 47 are accused of organizing and participating in an unofficial, non-binding primary poll in July last year that authorities said was part of a “vicious plot” to “overthrow” the government.

The vote was aimed at selecting the strongest opposition candidates for a legislative council election that the government later postponed, citing the COVID-19 pandemic.