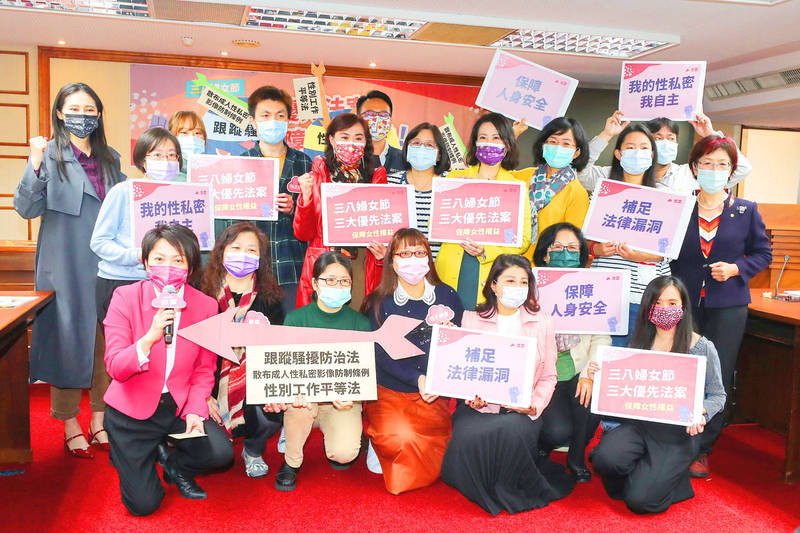 TIME FOR CHANGE: The Gender Equality in Employment Act was enacted in 2002, but has never allowed for employers to be investigated, a foundation chief executive said

On International Women’s Day yesterday, a group of legislators and civil groups called for the swift passage of a suite of legislation to address stalking, workplace harassment and revenge pornography, which are languishing in committee.

After identifying what they see as the main threats to women in Taiwan, Fan said that she and her colleagues drafted three bills as “arrows” to take down the “three great beasts.”

However, the draft “stalking harassment prevention act,” “regulations on preventing the unauthorized dissemination of private images” and an amendment to the Gender Equality in Employment Act （性別工作平等法） are still awaiting committee review by the legislature.

DPP Legislator Rosalia Wu （吳思瑤） called on the Executive Yuan to offer counterproposals to the three bills, and on legislators to deliberate on bills that have already passed the first reading.

Wu said she is in an “abusive political relationship” with Chinese Nationalist Party （KMT） Taipei City Councilor Lo Chih-chiang （羅智強）, who is calling for her removal, showing that harassment takes all forms.

Lo has initiated a petition to recall Wu over her support for easing restrictions on imports of US pork containing ractopamine.

The nation has 47 female lawmakers, comprising more than 40 percent of the total, but there is still room for improvement in other workplaces, DPP Legislator Chuang Ching-cheng （莊競程） said.

For example, the challenges his wife faced at work before and after having a child are unfathomable to most men, he said, adding that creating a more equitable environment for parents is of the utmost importance.

DPP Legislator Hung Sun-han （洪申翰） said that as Taiwanese society continues advancing, discussion about gender is expanding beyond the male-female binary to consider the treatment of gender minorities.

Garden of Hope Foundation chief executive Wang Yue-hao （王玥好） expressed hope that the bills would be passed soon to raise awareness about these emergent issues.

In addition, the Gender Equality in Employment Act has been on the books since 2002, but has never effectively addressed power imbalances or allowed for investigations into employers, Wang said.

The many victims of this form of gender violence suffer greatly at the hands of not only their abusers, but also from societal judgement, Tu said.

Many abusers are also repeat offenders, Tu added, urging the Executive Yuan to quickly propose its own version for consideration so that a law could be passed soon.