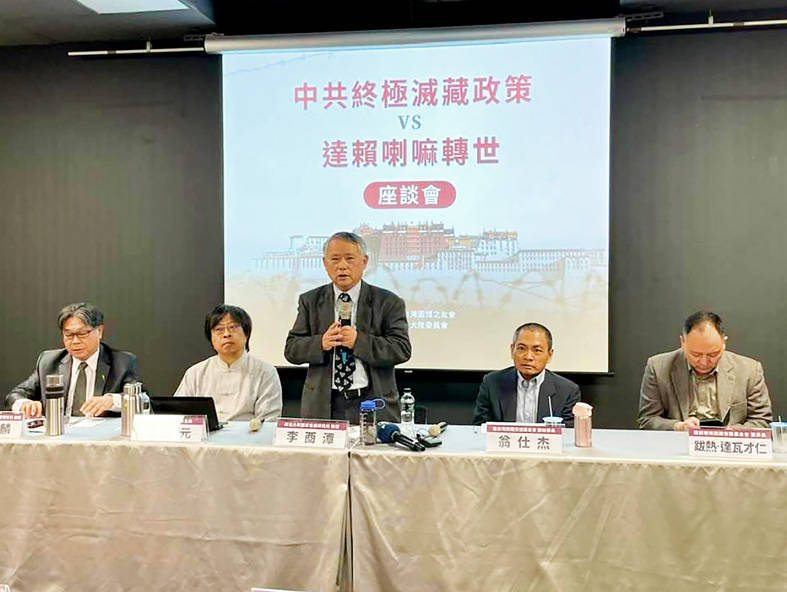 ‘WATERSHED LAW’: Dawa Tsering said Taiwan should put pressure on China over its behavior in Tibet by adopting a measure similar to the US’ Tibet Policy and Support Act

Thondop, a nephew of the Dalai Lama, made the remarks at a conference hosted by Tibetan advocacy groups in Taipei that discussed Beijing’s political interference into the Dalai Lama’s succession.

The conference, titled “China’s ultimate solution in Tibet vs the reincarnation of the Dalai Lama,” marked the 62nd anniversary of the Tibetan uprising on March 10, 1959.

Gyaltsen Norbu, the 11th Panchen Lama selected and recognized by China, does not command legitimacy among Tibetans, Thondrop said.

Bejing’s attempt to undermine the will of Tibetans and the religious principles behind the rules of succession has not been effective, which is proven by Gyaltsen Norbu almost completely disappearing from public view, he said.

China will guarantee the recurrence of past failures if it again disregards the will of Tibetans and the Dalai Lama by appointing his successor, who most certainly will not enjoy the world’s respect or admiration, he added.

One of the ways in which China politically interferes in the Tibetan religion is demonstrated by the Chinese Communist Party’s （CPP） attempt to dictate the reincarnation of living Buddhas, said Johnny Chang （張家麟）, professor of religious studies at Aletheia University.

For example, China’s Measures on the Management of the Reincarnation of Living Buddhas in Tibetan Buddhism establishes the preconditions for a living Buddha’s reincarnation and the guideline for their evaluation under the Chinese State Administration for Religious Affairs, he said.

“Even after the succession, a reincarnated Buddha’s education and training is subject to official approval, which gives China total control over the creation and education of a living Buddha,” Chang said.

Former Taiwan-Tibet Exchange Foundation deputy secretary-general Own Su-jei （翁仕杰） said that the legitimacy of China’s sovereignty claims over Tibet remains contested, because it rules the territory as a foreign occupying force.

That Tibetans residing inside and outside of China’s borders continue to launch political protests against Chinese rule and demand the Dalai Lama’s return shows that Bejing’s political legitimacy is not accepted by them, he said.

The US, through its Tibet Policy and Support Act, has adopted the position that only Tibetan Buddhists can legitimately appoint successors to lamas and has authorized sanctions against Chinese officials, said Dawa Tsering, chairman of Tibet Religious Foundation of His Holiness the Dalai Lama.

Taiwan and the world’s democracies should put pressure on China over its behavior in Tibet by adopting measures similar to the “watershed” law, Dawa said.