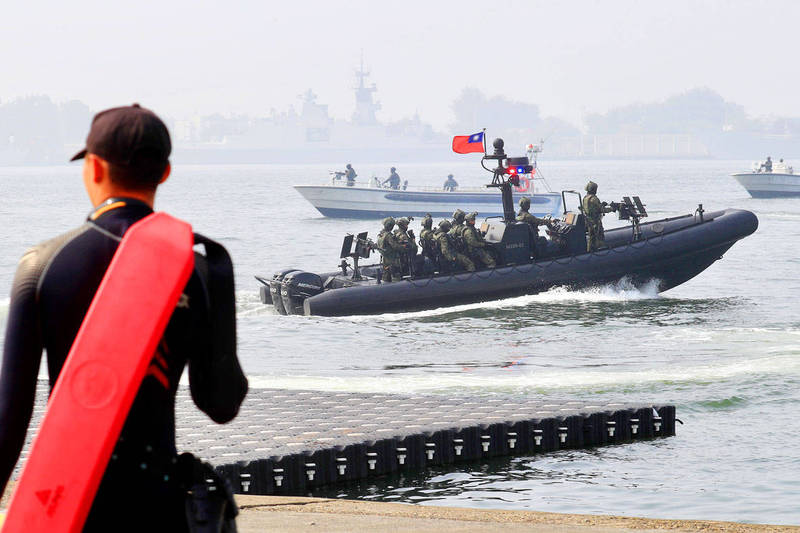 Navy special forces simulate a counter-infiltration operation during a drill in Kaohsiung on Jan. 27. Photo: EPA-EFE

FALLING BEHIND: Defense spending has failed to equal 3 percent of GDP, while Israel, which also faces military threats, spends 5 percent of its GDP, an academic said

Military experts yesterday urged the Ministry of National Defense to increase defense spending to at least NT$400 billion （US$14.15 billion）.

Su Tzu-yun （蘇紫雲）, director of the Institute of National Defense and Strategic Research’s division of defense strategy and resources, said the year-on-year increase of Chinese defense spending was political and defense-related.

The year 2027 would mark the centennial of the founding of the Chinese People’s Liberation Army （PLA）, which it plans to celebrate by launching its third carrier, and continuing production of Type 075 amphibious assault ships, Type 096 ballistic missile submarines and H-20 stealth bombers, Su said.

The new units would allow China to stabilize its influence within the first island chain and further project its power into the second island chain, satisfying Beijing’s military and political goals, he said.

The increased production of military hardware would also be in line with Chinese President Xi Jinping’s （習近平） promotion of a “dual circulation” strategy, as it would stimulate the economy, bolster the military and achieve political stability, Su said.

Su also said the ministry should scale its defense spending to at least NT$400 billion to balance the military’s upkeep costs and investment in precision munition and platforms.

National Taiwan University associate professor of political science Chen Shih-min （陳世民） said that the disparity in defense spending across the Taiwan Strait has been extant for many years, adding that the Chinese military’s near-daily incursions into Taiwan’s air defense identification zone over the past half year is clearly hostile and threatening.

Chen said that he was not arguing for a military arms race with China, but current defense spending would be hard-pressed to keep up with the cost of arms sales packages announced under former US president Donald Trump and President Tsai Ing-wen’s （蔡英文） adoption of an indigenous arms manufacturing program.

Sheu Jyh-shyang （許智翔）, a postdoctoral fellow at the Institute for National Defense and Security Research, said that the disparate funding available to Taiwan and Chinese militaries lends more credence to support asymmetric warfare.

Sheu cited the use of large quantities of precision munitions to target platforms developed by China, as an example of goals for Taiwan to focus on.