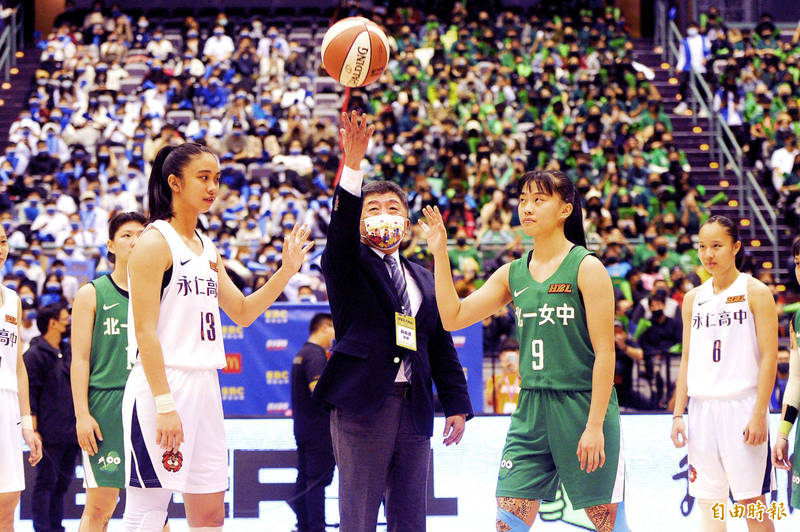 Minister of Health and Welfare Chen Shih-chung performs the tip-off of a High School Basketball League game between Tainan Municipal Yongren High School and Taipei First Girls’ High School yesterday at the Taipei Arena. Thanks to Taiwan’s ongoing success in combating the COVID-19 pandemic, Chen and other fans were able to watch the game in person at the arena. Photo: Lin Cheng-kung, Taipei Times

SOLEMN MILESTONE: The Taiwanese man, in his 60s, had a history of diabetes and hypertension, and had developed severe pneumonia from COVID-19, officials said

The Central Epidemic Command Center （CECC） yesterday reported seven imported cases of COVID-19 and the death of a person who had the virus, bringing the nation’s toll from the disease to 10.

Case No. 935, a Taiwanese man in his 60s, who had a history of diabetes and hypertension, died on Friday, said Minister of Health and Welfare Chen Shih-chung （陳時中）, who heads the center.

The man, who had been working in Myanmar since January last year, began experiencing symptoms on Dec. 24 last year, tested positive on Dec. 29 and was hospitalized the following day, Chen said.

The man, who was dependent on a ventilator, was placed on extracorporeal life support on Monday, and died from multiple organ failure on Friday, Chen said.

Antibacterial agents, steroid medication and immunoglobulins were used as treatment, he said, adding that data from several countries have shown worse prognoses for COVID-19 patients with chronic diabetes and hypertension.

The seven imported cases are all fishers — two Indonesian men and five Filipinos — who are in their 20s to 40s, Chen said.

They all provided a negative polymerase chain reaction （PCR） test result from within three days before boarding a plane to Taiwan, and arrived on Feb. 19 without showing any symptoms, he said.

They were tested on Thursday, after completing centralized quarantine, and the results came back positive yesterday, Chen said, adding that no close contacts were identified, as they stayed in single rooms during quarantine after arriving in Taiwan.

A total of 967 cases have been confirmed in Taiwan, with 851 identified as imported cases. Twenty-five people remain isolated in hospitals, the CECC said.

Meanwhile, Vietnam on Friday reported that a Taiwanese traveler was confirmed to have COVID-19.

However, the person tested positive in a second test on Thursday while in quarantine in a single room at a hotel, he said.

CDC Deputy Director-General Chuang Jen-hsiang （莊人祥）, who is the CECC’s spokesman, said the case is the fifth in which travelers from Taiwan have tested positive in Vietnam.

The first two cases were later determined to have likely contracted the disease while in centralized quarantine in Vietnam, and all the close contacts of the two latter cases tested negative in PCR and antibody tests in Taiwan, Chuang said.

The CECC would still conduct contact tracing on the new case, and four close contacts have already been identified, he said.