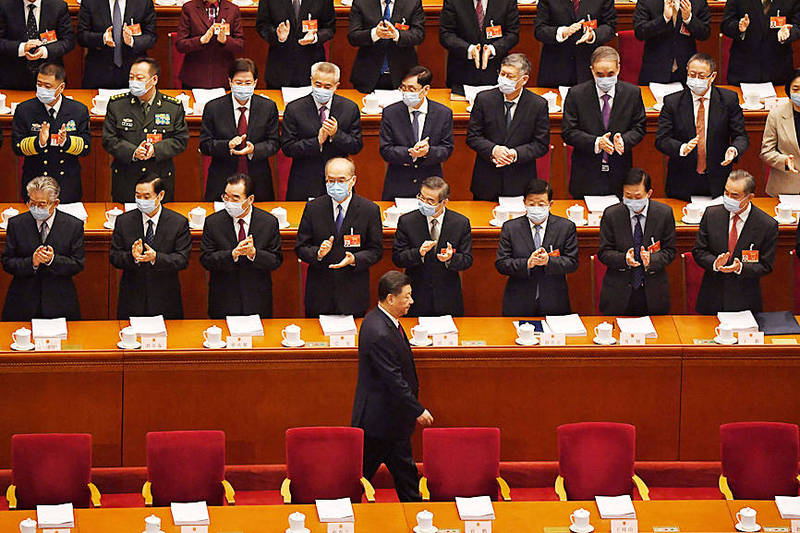 Delegates applaud as Chinese President Xi Jinping, center, arrives for the opening ceremony of the Chinese National People’s Congress at the Great Hall of the People in Beijing yesterday. Photo: AFP

China yesterday projected defense spending growth of 6.8 percent this year, while saying that it would deter any “separatist activity” from Taiwan, but remain committed to promoting cross-strait relations.

Beijing has increased its military activity near Taiwan in the past few months, responding to what it calls “collusion” between Taipei and Washington, the nation’s main international backer and arms supplier.

At the opening of the annual Chinese National People’s Congress, Chinese Premier Li Keqiang （李克強） said that Beijing stands by its “one China” principle, which states that Taiwan is part of China.

China remains committed “to promoting the peaceful growth of relations across the Taiwan Strait and China’s reunification,” he told about 3,000 delegates at the Great Hall of the People in Beijing.

“We will promote exchanges, cooperation and integrated development across the Taiwan Strait. Together we can shape a bright future of rejuvenation for our great nation,” he added.

The Mainland Affairs Council in Taipei responded by urging China to begin “benign” interactions with it to gradually resolve disagreements through communications.

The council said the government would continue to resolutely defend its sovereignty and Taiwan’s democracy and freedom, and that healthy and orderly exchanges were better than “enforced” pressure.

Also at the conference, the Chinese Ministry of Finance said it would bolster the country’s defense spending 6.8 percent this year, the largest gain since 2019, amid tensions with the US and key neighbors.

Military expenditure is expected to climb to 1.35 trillion yuan （US$208.03 billion） in the coming year, the ministry said.

The figure compares with a projected rise of 1.8 percent in budgeted fiscal spending.

A Bloomberg calculation of the latest defense budget number shows spending for this year would actually rise 6.9 percent.

“We will provide stronger financial guarantees to vigorously support the modernization of national defense and the armed forces, and help China’s defense capabilities rise in step with its economic strength,” the ministry said in a report.

The spending boost comes after China sparred with India on its border and as the nation seeks to modernize its military to make it more competitive with the US.

“We will boost military training and preparedness across the board, make overall plans for responding to security risks in all areas and for all situations, and enhance the military’s strategic capacity to protect the sovereignty, security and development interests of our country,” Li said.

“Considering Beijing’s threat perceptions and goal of achieving military modernization by 2035, I’d expect defense spending to continue to be a priority,” said Meia Nouwens, a senior fellow at the International Institute for Strategic Studies.