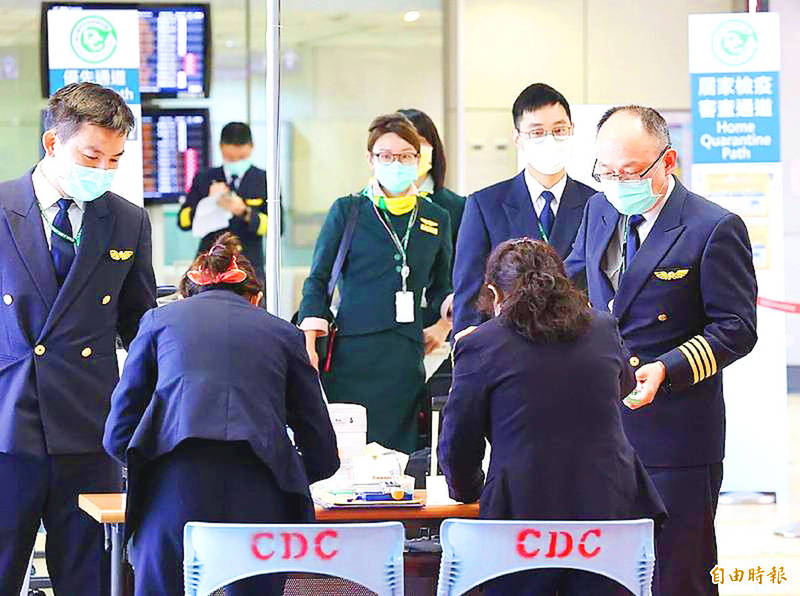 An airline crew arrives at a testing station operated by the Centers for Disease Control at Taiwan Taoyuan International Airport in an undated photograph. Photo: Cheng Wei-chi, Taipei Times

SAFETY FIRST: About 25,000 workers in the airline and airport service industry would be eligible for vaccination, based on the government’s order of priority, the CAA said

About 70 percent of airline and airport service workers are willing to be vaccinated against COVID-19, Civil Aeronautics Administration （CAA） Director-General Lin Kuo-hsien （林國顯） said yesterday, after the nation received its first batch of COVID-19 vaccines the day before.

The Central Epidemic Command Center （CECC） has listed pilots, flight attendants and sailors on international commercial vessels third in the order of eligibility for vaccination as they have a higher risk of COVID-19 exposure because of their occupations.

About 25,000 people would be eligible for vaccination, including cabin crew members, aircraft maintenance workers, ground staff, catering service personnel, cleaning staff at terminals and sales clerks in duty-free shops, Lin said, adding that the agency has submitted the list to the center.

Internal surveys conducted by China Airlines and EVA Airways showed that 60 to 70 percent of cabin crews said they wanted to be vaccinated, especially those working on international flights, Lin said.

The agency estimated that about 70 percent of the eligible people on the list would be vaccinated, he said.

Lin added that the CAA is next week to announce new quarantine rules that would ease restrictions on pilots and flight attendants.

The new rules would allow them to quarantine for five days and practice self-health management for another nine days, he said, adding that the rules would take effect on the day of the announcement.

After a New Zealand pilot breached disease prevention regulations, which led to three domestically transmitted cases, the center on Jan. 1 tightened quarantine rules for cabin crews, requiring them to quarantine for seven days and practice self-health management guidelines for another seven days.

Last week, the agency suggested that the regulations be relaxed after only isolated, minor and unintentional breaches were recorded.

In other news, the demand for “fake flight” tours appears to have faded, with the number of participants falling drastically, CAA data showed.

The tours — first offered by CAA and subsequently by airlines — were perceived as a creative way to satisfy people’s desire to travel amid the COVID-19 pandemic.

The fake vacation experiences attracted a total of 10,309 travelers in the initial phase when they were first offered in the summer last year, but drew only 427 passengers for the higher-end tours in the second phase, the agency said.

Airlines did not offer the fake flight experiences to make money, but to reinforce their brand name and help cabin crews retain their license, Lin said.

“Carriers have discovered that they can make more money by simply offering cargo services, so they are deploying more passenger jets to carry goods, which in turn has reduced the number of fake flight tours,” he said.

At the start, participants only visited international airports or flew around the nation’s airspace before returning to the same airport.

Later on, airlines began to offer more high-end tours by landing at other domestic destinations, he said.

“These destinations are accessible by other transport systems and the flights are more expensive, which probably turned off some consumers,” Lin said.