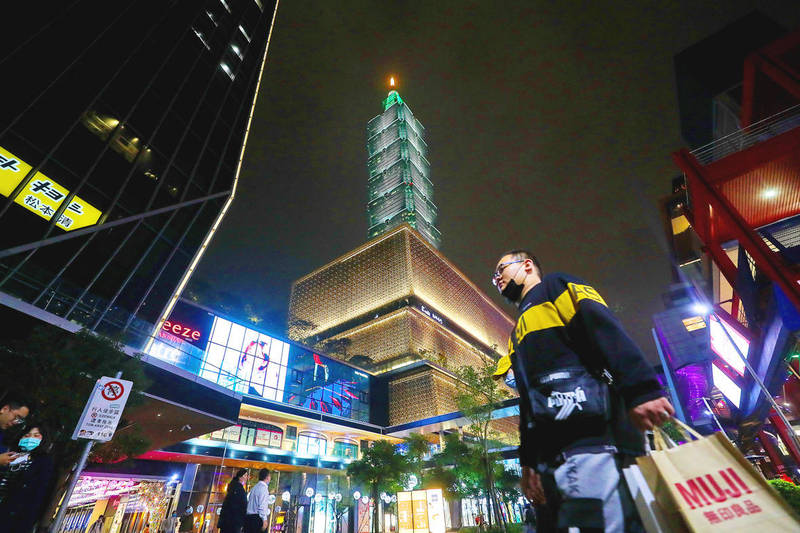 People walk past a department store in Taipei’s Xinyi District yesterday after Taiwan was ranked the sixth freest economy in the Index of Economic Freedom released by the Heritage Foundation. Photo: CNA

Taiwan’s economy ranked sixth in this year’s Index of Economic Freedom, as its overall score picked up 1.5 points due primarily to an improvement in government integrity, an annual Heritage Foundation survey released yesterday showed.

The nation ranked 11th in last year’s edition of the survey.

Taiwan was fourth among 40 economies in the Asia–Pacific region after Singapore, New Zealand and Australia, with an overall score of 78.6, above the regional and world averages, the survey showed.

Taiwan’s economy put up its best performance in the survey’s 27-year history, inching closer to the ranks of the free than ever before, it said.

The main factor holding Taiwan from the top economic freedom category remains a relative lack of labor freedom, it said, adding that the government raised the minimum wage again last year, despite the possibility of damage to productivity and flexibility for workers.

As of December last year, Taiwan reported only seven deaths related to the COVID-19 pandemic, which the survey called a remarkably low figure, compared with fatalities in other economies.

Taiwan’s trade-dependent economy is driven by a competitive manufacturing sector that encompasses electronics, machinery, petrochemicals, and information and communication technology products, it said.

However, the nation’s workforce is shrinking with an aging population and there is also a shortage of blue-collar manufacturing workers, it said.

The government provides research and development grants to encourage local high-tech firms to forge partnerships with foreign companies, it said.

The nation also has a well-developed investment framework that facilitates the flow of goods and capital, it said.

The financial sector continues to evolve and expand, and the stock market is open to foreign participation.

Interests in property are protected, and the system for recording mortgages and liens is reliable, it said.

While corruption is much less prevalent today, it remains a problem, especially because politics and big business are closely intertwined, the foundation said.

The top individual income tax rate is 40 percent and the top corporate tax rate is 20 percent, while the overall tax burden equals 8.9 percent of total domestic income and public debt is equivalent to 28.2 percent of GDP, it said.