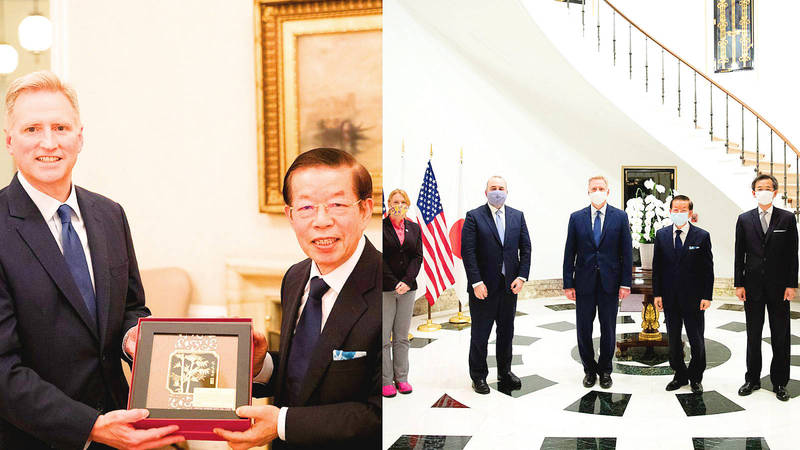 SETTING THE TONE: US Secretary of State Antony Blinken said that Washington would seek to collaborate with Beijing when it can, but would be ‘adversarial when it must be’

By Lu Yi-hsuan and Jonathan Chin / Staff reporter, with staff writer, and CNA

The Ministry of Foreign Affairs yesterday thanked US President Joe Biden’s administration after it issued interim guidance on strategic priorities, including reaffirming support for Taiwan.

The 23-page Interim National Security Strategic Guidance report, published by the White House on Wednesday, said that the US would “support Taiwan, a leading democracy and a critical economic and security partner, in line with longstanding American commitments.”

Since his inauguration in January, Biden’s administration has expressed robust support for Taiwan and said that the US’ security commitment to the nation was “rock solid,” ministry spokeswoman Joanne Ou （歐江安） said.

Taiwan and the US share the same ideals and goals in defending freedom and democratic values, she said.

The ministry will continue to work closely with the Biden administration to strengthen the Taiwan-US partnership on the basis of the nations’ longstanding friendship, Ou said.

The document said that the most effective way for the US to outcompete China is to invest in its people, economy and democracy.

“By bolstering and defending our unparalleled network of allies and partners, and by making smart defense investments, we will also deter Chinese aggression and counter threats to our collective security, prosperity and democratic way of life,” the report said.

“When the Chinese government’s behavior directly threatens our interests and values, we will answer Beijing’s challenge,” it said, adding that the US would confront unfair and illegal trade practices, cybertheft and coercive economic practices that hurt American workers.

Also on Wednesday, US Secretary of State Antony Blinken gave his first major address in office.

Blinken promised that the Biden administration would prioritize diplomacy over military action, and build cooperation with the world on global challenges such as climate change and COVID-19.

He vowed to champion the rights of Hong Kong and Uighurs, saying that if not, “China will act with even greater impunity.”

“China is the only country with the economic, diplomatic, military and technological power to seriously challenge the stable and open international system — all the rules, values and relationships that make the world work the way we want it to,” he said.

“Our relationship with China will be competitive when it should be, collaborative when it can be and adversarial when it must be, and we will engage China from a position of strength,” he added.

In related news, Representative to Japan Frank Hsieh （謝長廷） was this week invited to the official residence of the US ambassador to Japan to discuss regional issues.

Hsieh is the first Taiwanese representative to Japan to be invited to the US ambassador’s residence since formal ties were severed in 1979.

“I welcomed Frank Hsieh to the Ambassador’s Residence to discuss our shared priorities across a wide range of topics, including our vision for regional stability, economic prosperity, and stronger people-to-people ties,” Joseph Young, charge d’affaires ad interim at the US embassy, wrote on Twitter.

Hsieh and Young were shown together in images posted on Twitter, one of which shows Hsieh’s signed remarks on the latter’s guestbook, dated Tuesday.

Hsieh wrote on Facebook that he and Young exchanged views on issues including the facilitation of peace and prosperity in the region.

“Taiwan hopes to continue the deepening of its friendship and partnership with nations that share its values,” he wrote.