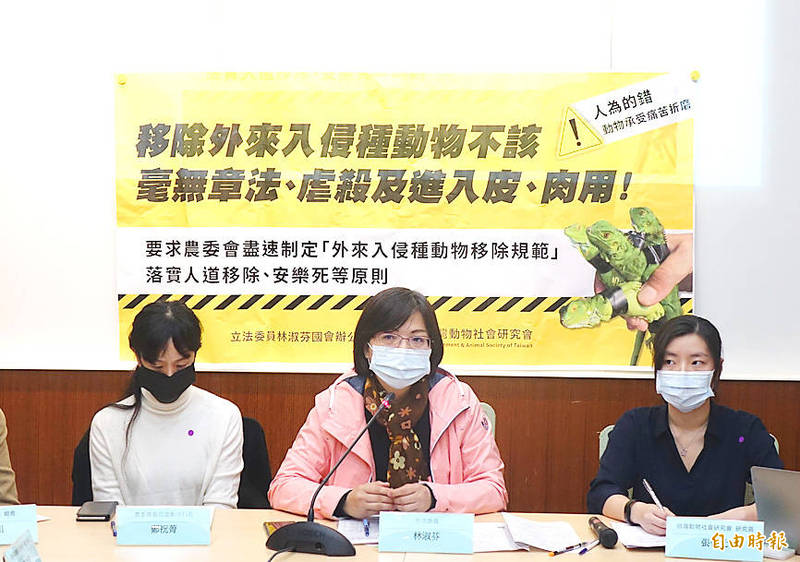 Democratic Progressive Party Legislator Lin Shu-fen （林淑芬） yesterday called for regulations on the extermination of invasive species, after images emerged on the Internet showing a man killing a green iguana by placing a firecracker in its mouth.

The images went viral after the Facebook group Baoliao Commune reposted them on Feb. 19, saying that the government’s bid to control the green iguana population by mobilizing local residents has resulted in animal abuse.

The Council of Agriculture’s lax regulations for pet imports is to blame for the nation’s invasive species problem, Lin told a news conference at the Legislative Yuan, which was also attended by members of the Environment and Animal Society of Taiwan.

The government should stop subsidizing citizens for killing or capturing invasive species, and instead devise a policy that utilizes animal control professionals acting under clear guidelines to safely and ethically handle animals, Lin said.

Reports that green iguanas were being consumed as game meat suggest that the unregulated hunting of the animals poses a threat to public health, she said, adding that wild animals could carry zoonotic diseases.

The regulations must state that invasive species should not be abused, that removal should be conducted by qualified professionals, and that the animals should be put down without causing unnecessary pain or suffering, Lin said.

The carcasses of euthanized animals should be disposed of, and should not be used to produce meat or leather products, which could expose the public to diseases, she said.

A faculty member at the Pingtung University of Science Technology has been appointed to help the county government educate the public on the ethical treatment of animals, she said, adding that the council could also release its internal animal control guidelines for public use.

The council’s Department of Animal Husbandry and Animal Protection Director Cheng Chu-ching （鄭祝菁） said her department has opened investigations into the firecracker incident, and allegations that iguanas were being harvested for meat or hides.

Authorities in several counties have copied the online images as evidence, she said.

People who kill or harm a pet green iguana could face at least one year in prison under Article 25 of the Animal Protection Act （動物保護法）, she added.

《TAIPEI TIMES》 ‘Liaoning’ may be vulnerable…