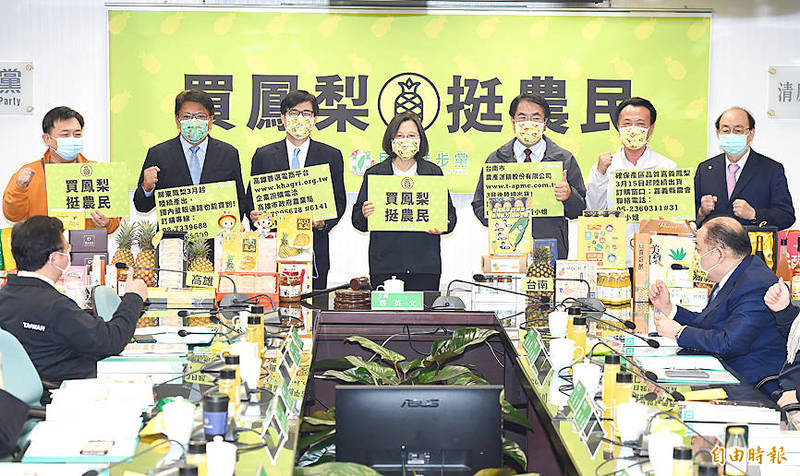 ‘PINEAPPLE NATIONAL TEAM’: President Tsai Ing-wen urged Taiwanese to buy pineapples, as the harvest is to begin soon and continue for a few months

China on Friday last week announced that from Monday it would suspend imports of Taiwanese pineapples, citing concerns about harmful organisms found on the fruits. The import ban accounts for nearly 10 percent of Taiwan’s annual pineapple production, but the amount was offset after the public and private sectors joined forces to purchase the fruit.

The party has set up a “pineapple national team,” Tsai, who is the DPP chairperson, told a news conference at the party’s headquarters in Taipei.

She urged Taiwanese to consume fresh pineapples and pineapple-based products.

Tsai was joined by the heads of local government from Tainan and Kaohsiung, as well Chiayi and Pingtung counties, which are the nation’s main pineapple production regions.

DPP officials at the event presented fresh pineapples and a variety of finished products, including pineapple cakes, pineapple jam, pineapple toast, as well as vinegar, wine, sauce, and cosmetics and health food products made from the fruit.

Tsai thanked Taiwanese for helping pineapple farmers over the past few days, saying: “Taiwan will stand together in unity, as people face unreasonable actions in international trade.”

“A number of foreign embassies and representative offices have expressed their support for Taiwanese pineapples, so we wish to thank all our international friends for their support, as well our citizens for uniting to help the nation’s pineapple growers,” Tsai said.

The pineapple harvest gets under way later this month and continues for several months, she said, adding that now is the time to place orders.

People could buy additional pineapples during the harvest season to help pineapple farmers overcome the challenge, she added.

“A crisis also creates new opportunities. When facing challenges, Taiwan never gets knocked down. We take them on and grow stronger,” she said. “Taiwanese came together to support hardworking farmers and their high-quality products. The international community will also stand with Taiwan.”

Kaohsiung Mayor Chen Chi-mai （陳其邁） said that “the DPP has important support bases in southern Taiwan, which overlaps with pineapple production areas, so it is natural for DPP supporters to eat pineapples, and when China lashes out against our pineapples, we have to join forces.”

Pingtung also produces a variety of processed pineapple products, Pan said, urging people to buy pineapples at intervals over the coming months to ensure they have the freshest, top-quality pineapples.