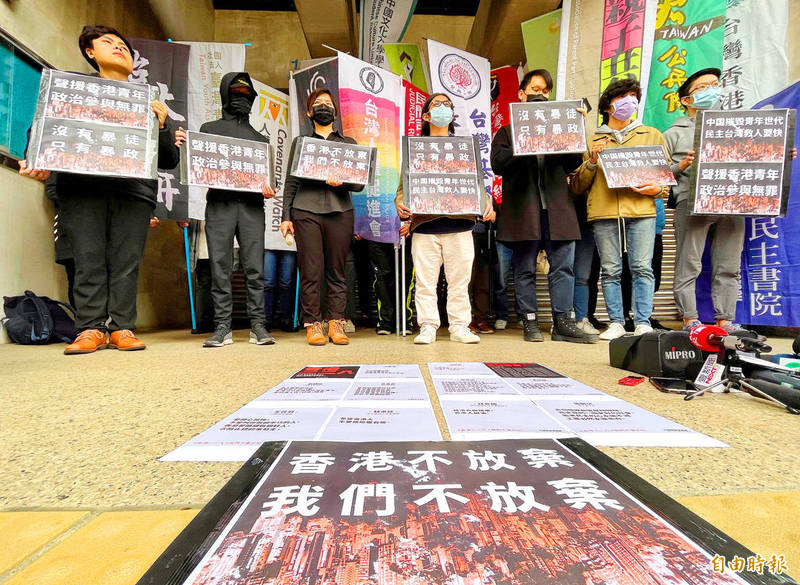 The National Students’ Union of Taiwan yesterday urged the government to provide safe entry for Hong Kongers seeking asylum in the nation.

As countries gradually lift their border controls, the government should provide safe entry to Hong Kongers seeking asylum in Taiwan, the group said in a statement, but added that this should be done after careful consideration had been given to the prevention of COVID-19.

The union supports a forthcoming proposal to be made by several groups, including the Taiwan Association for Human Rights, to introduce a “Hong Kong human rights and democracy clause” to the Laws and Regulations Regarding Hong Kong and Macao Affairs （香港澳門關係條例）, it said.

The proposed amendment would require the Executive Yuan to perform an annual evaluation on the status of human rights and autonomy in Hong Kong, and draw up countermeasures, it said, urging lawmakers to pass it.

The government should continue to provide ways for students in Hong Kong to enroll in or transfer to local schools, and to expand the list of schools accepting such requests, it said.

Union members also held a news conference in front of the Legislative Yuan in Taipei in support of the Chinese University of Hong Kong student union, as well as the 47 pro-democracy figures facing charges under the territory’s national security legislation.

They held placards and chanted slogans such as: “Support Hong Kong youth,” “Political participation is not a crime,” “There are no rioters, only tyranny,” and “Hong Kongers will not give up. We will not give up.”

The university said in a statement on Thursday last week that it was imposing a series of measures on the student body — including withholding “until further notice University administrative support to the Student Union Executive Committee and provision of venues for its activities” — after the committee failed to clarify its members’ “potentially unlawful statements and false allegations [against the university], despite repeated cautioning and advice.”

“As protesters, we will not give up,” said Kuan Shan-yueh （關山月）, a Hong Kong graduate student in Taiwan, adding that he would “continue to support [his] brothers in Hong Kong, and walk with them, until history declares us innocent.”