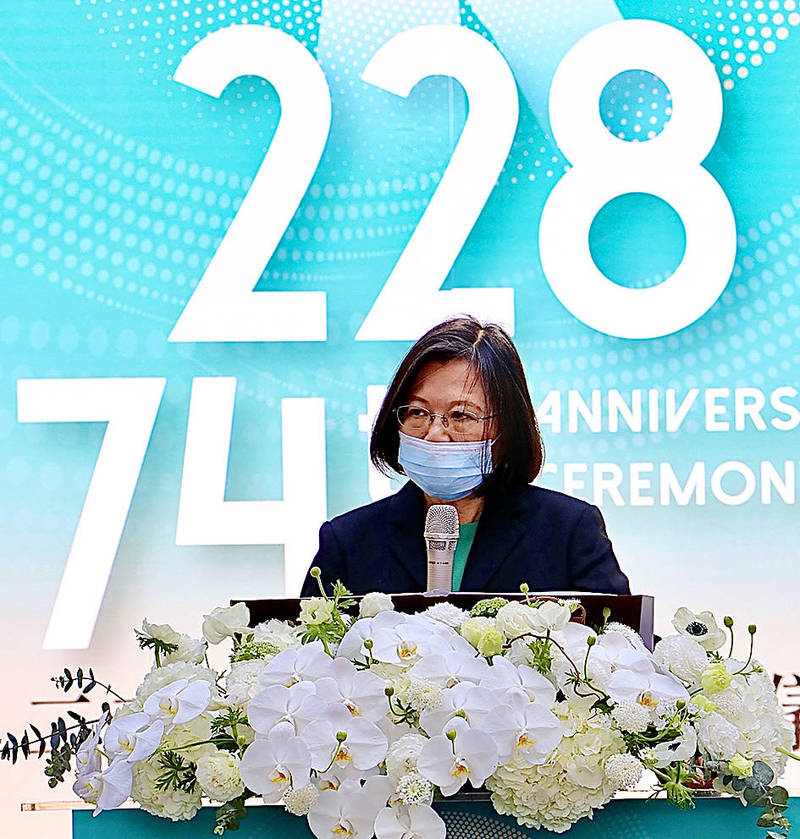 President Tsai Ing-wen yesterday speaks at a ceremony in Kaohsiung marking the 74th anniversary of the 228 Incident. Photo: CNA

SCARS REMAIN: As international experience shows that democracy might regress and authoritarianism might return, Taiwan must unite to hold on to its freedom, Tsai said

President Tsai Ing-wen （蔡英文） yesterday urged people to cherish the nation’s hard-won democracy and freedom, and said that awareness of human rights must be internalized into the DNA of the government.

She made the remarks at a Peace Memorial Day event at the Kaohsiung Museum of History to commemorate the 74th anniversary of the 228 Incident.

The 228 Incident refers to a protest in 1947 against the then-Chinese Nationalist Party （KMT） regime and the resulting crackdown that left thousands dead and led to nearly four decades of martial law. Anti-government protests had spread to Kaohsiung by March 3, 1947.

Patches on the walls of the museum cover bullet holes left behind from the Incident, Tsai said, adding that when the military intervened, they targeted the Kaohsiung City Government, Kaohsiung Main Station and Kaohsiung Senior High School.

However, despite being under authoritarian rule, Taiwanese did not give up fighting for freedom and democracy, she said.

The 228 Incident, the White Terror period and authoritarian rule are painful memories for everyone living in Taiwan, she said.

The government should have a deep understanding of the system of oppression under authoritarian rule, and how it violated human rights, so that transitional justice can be achieved, she said.

Generations of Taiwanese must unite, work hard, cherish their hard-won democracy and freedom, and continue to define their history, she said.

International experience shows that democracy might regress and authoritarianism might return, Tsai said, adding that human rights awareness must be internalized into the DNA of the government.

Lin’s mother and twin daughters were found stabbed to death at his house on Feb. 28, 1980. The perpetrator and motive were never established, but the killings are widely believed to have been politically motivated.

Calling the 228 Incident the most tragic event in the nation after the end of World War II, Lai said it resulted in the disappearance of a generation of social elites.

Many people moved abroad, and others were afraid to speak up until attorney Lee Sheng-hsiung （李勝雄） and others in 1987 organized in Tainan the nation’s first-ever parade calling on the government to redress the wrongs of the Incident, Lai said.

The church’s commemoration of the Lin family murders could serve as a model for others, he said, adding that the church was built on the site of the family’s former residence.

KMT Chairman Johnny Chiang （江啟臣） yesterday wrote on Facebook that the 228 Incident left a deep scar on the nation’s history and that differences in people’s memories and understanding of history have led to a “never-ending political fight.”

Truth, consolation and reconciliation are the only way to face historical wounds, he wrote.

In pursuing transitional justice, the nation should pursue reconciliation and coexistence of different groups, values and views, he wrote.

“Many people have taken steps toward this path, but even today, 74 years later, we have still not gone far enough,” he wrote.

Vice President William Lai, left, reads the Bible at Gikong Presbyterian Church in Taipei yesterday during a memorial service for the victims of the 228 Incident and members of Lin I-hsiung’s family who were murdered on Feb. 28, 1980. Photo: CNA