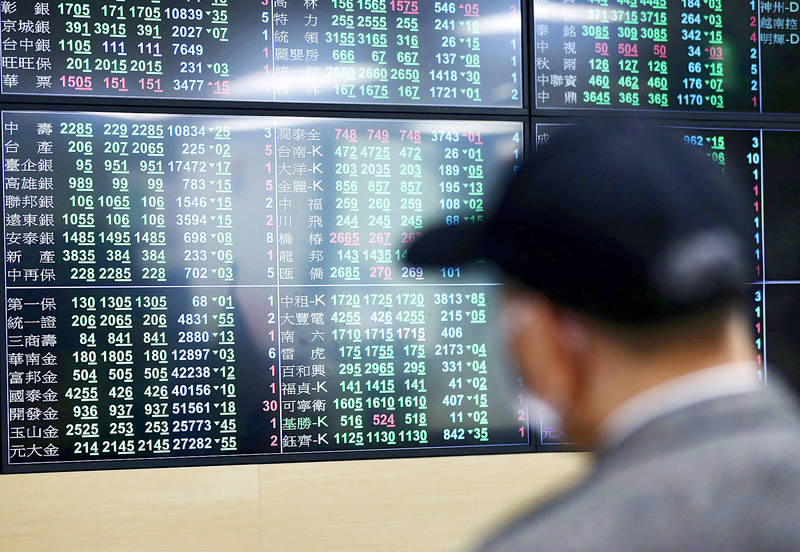 A man looks at an electronic stock board at a brokerage firm in Taipei yesterday. Photo: CNA

CAUGHT OFF GUARD: A jump in the US Treasury yield might have surprised investors, putting pressure on equities as the 10-year yield outperformed stocks, an analyst said

The weighted index plunged 358 points to 16,094.93 points soon after the market opened, before gradually recouping some losses to end the day 3.03 percent lower at 15,953.8 points, on turnover of NT$432.112 billion, Taiwan Stock Exchange data showed.

It was the first time the index closed below 16,000 points after standing above it for seven consecutive trading days, the data showed.

The sell-off could be due to the 10-year US Treasury yield climbing 16 basis points to close at 1.54 percent on Thursday, the highest level since February last year, Taishin Securities Investment Advisory Co （台新投顧） general manager Mason Li （李鎮宇） said by telephone.

That sharp increase “surprised many investors and put pressure on stock markets. With the 10-year [US Treasury] yield of 1.54 percent outperforming many stocks’ yields, some investors began to consider favoring bonds over stocks and pulling money out of equities,” Li said.

However, the US Federal Reserve is expected to take action to curb the advancing 10-year Treasury yield, which is used as a benchmark for mortgage rates, as its rise would increase borrowers’ burden and the US economy has not recovered from the effects of COVID-19, Li said.

Although the local stock market took a hit, Li said he expects it to remain a bull market, as local stocks’ average yield of 3 percent would still be attractive to local and foreign investors.

China Airlines Ltd （CAL, 中華航空） bucked the trend, with its share price rising 5.66 percent to NT$14, which was even higher than its price before the COVID-19 pandemic, as many investors expect the airline to profit from rising air freight rates and solid cargo business.

CAL was the most actively traded stock yesterday, with transactions hitting 1.01 billion shares, the data showed.

On the other hand, EVA Airways Corp’s （長榮航空） share price dipped 0.32 percent to NT$15.80, even though the airline has announced that it is to raise air cargo rates from next month, which would boost its air cargo revenue.