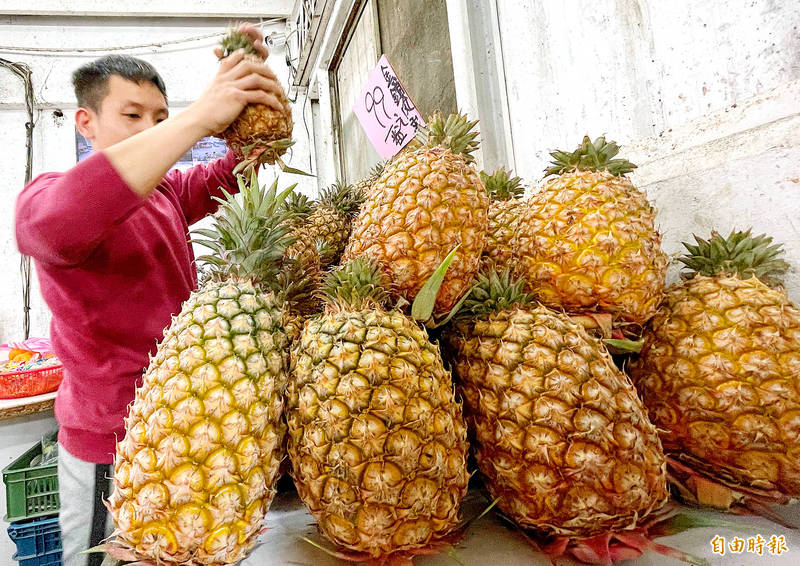 ‘UNFRIENDLY’: COA Minister Chen Chi-chung said that Beijing probably imposed the sanction because the pineapple production season is about to start in Taiwan

More than 99 percent of pineapples sold to China passed inspections, the government said yesterday, after China earlier in the day abruptly suspended imports of pineapples from the nation, which Taipei called an “unfriendly” move.

From Monday, China is to stop importing pineapples from Taiwan, the Chinese General Administration of Customs said.

Were the organisms to spread in China, they would pose a serious threat to agricultural and ecological safety, he said.

The import ban is scientifically rational and complies with Chinese law, he said.

The Council of Agriculture （COA） announced that it would spend NT$1 billion （US$35.33 million） to promote pineapple sales at home and abroad, while President Tsai Ing-wen （蔡英文） and Vice President William Lai （賴清德） would take action to support domestic growers by consuming more pineapples themselves, Chang said.

Farmers can rest assured that the government would do its utmost to help them, he said, adding that hopefully, Taiwanese would support the local pineapple industry, just like Australians supported their country’s wine industry after China imposed high tariffs on those products.

COA Minister Chen Chi-chung （陳吉仲） said that the council had received China’s “unilateral notice” on Thursday evening, without any warning.

It attempted to express its concern to its counterpart in China, but the Chinese contact did not answer a telephone call, Chen said.

Taiwan produces nearly 420,000 tonnes of pineapples every year, and has exported 6,200 batches to China since last year, with only 13 batches, totaling 141 tonnes, failing tests, meaning the qualification rate was 99.79 percent, he said.

In “normal” international trade practices, this qualification rate is top-notch, while the few pineapples that did not pass were approved after fumigation, Chen said.

Beijing probably imposed the sanction because Taiwan’s pineapple production season is about to start, which would go against normal international trade practice, he said.

Data from the council showed that plantations in Pingtung County produce 30 percent of the nation’s pineapples, followed by Kaohsiung and Tainan （14 percent each）, Chiayi County （13 percent）, Nantou County （12 percent） and Hualien and Taitung counties （percentages uncertain）.

For all produce, exports to China last year made up 20.7 percent, totaling more than US$1 billion, followed by Japan （15.5 percent） and the US （13.7 percent）, the data showed.