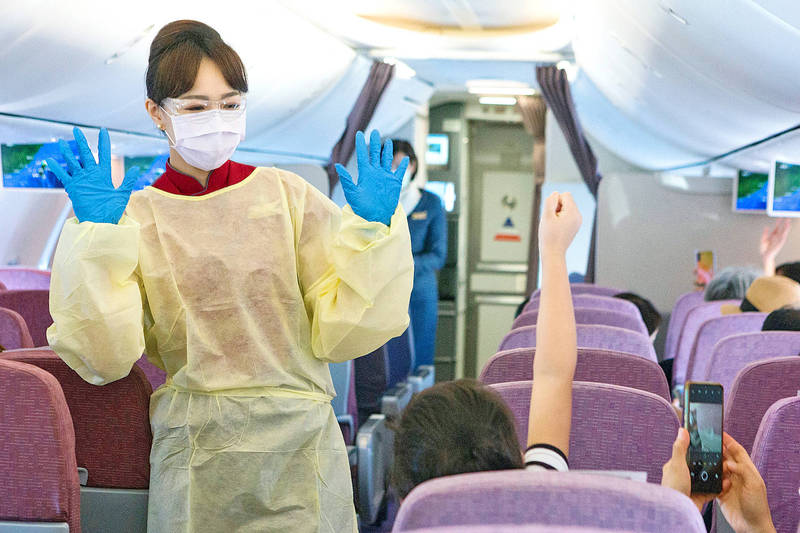 The Central Epidemic Command Center yesterday said that it is considering easing the quarantine restrictions imposed on airline cabin crews following flight duties overseas, adding that it plans to finalize details next week.

After quarantine breaches by several flight attendants and pilots led to three locally transmitted cases of COVID-19, the quarantine requirement for cabin crews was tightened on Jan. 1.

The prior rules required them to home quarantine for three to five days and practice self-health management for another seven days.

The Civil Aeronautics Administration （CAA） proposed easing the quarantine for cabin crews after only isolated and minor breaches were recorded over the past two months, CAA Director-General Lin Kuo-shian （林國顯） said yesterday morning, adding that the agency awaits the center’s approval.

Since last month, there were nine quarantine breaches involving crew members, seven of which were voluntarily reported by airlines, said Minister of Health and Welfare Chen Shih-chung （陳時中）, who heads the center.

The center is reviewing rules that the CAA has proposed for airlines, which detail management’s responsibilities in ensuring that crew member quarantines are strictly enforced, Chen said.

“We are considering reducing the home quarantine for cabin crew members from seven days to five if there have only been isolated breaches, but they would need to observe self-health management guidelines for nine days,” Chen said, adding that the center should be able to announce details next week.

Relaxing the quarantine requirement for crew members should not cause public concern as long as the cabin crews and airlines strictly practice disease prevention regulations, Lin said, adding that the breaches recorded so far have been minor and unintentional.

For example, crew members were asked to stay in their hotel and not to go out when at overseas destinations, but one crew member was locked out of their room when they went to use a vending machine and forgot their key card, Lin said, adding that the person broke the rules about not leaving the hotel room.

Another crew member thought the quarantine was finished after being tested at a medical facility on the seventh day, so they drove to a gas station, he said.

Offenders have an opportunity to explain their situation and fines are based on the severity of the breaches, he added.

“We hope that the relaxed quarantine rules for cabin crews can take effect as soon as next month, as the nation will once again have transiting flight passengers from Monday,” he said.