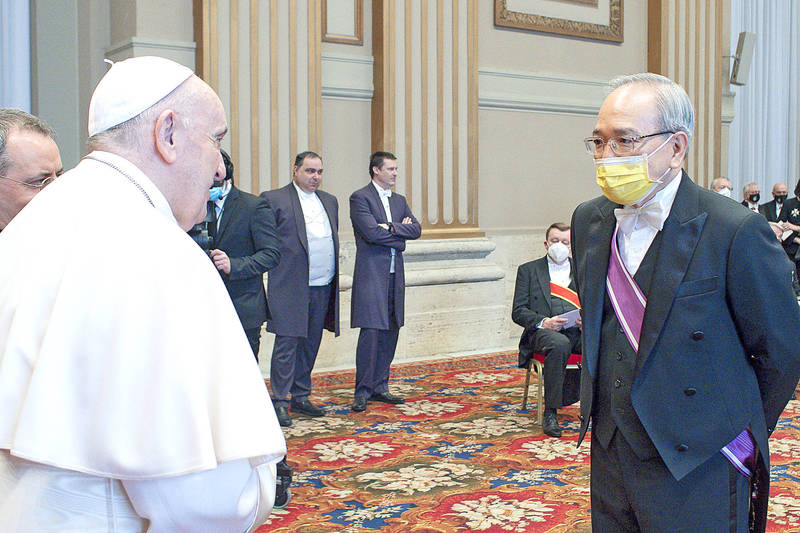 CCP AS GOD: Minister of Foreign Affairs Joseph Wu said the law orders all practitioners to love the motherland, and worship the communist leaders

The Ministry of Foreign Affairs yesterday slammed Beijing for issuing a set of rules on clergy and pledged to work more closely with the Vatican in defending religious freedom.

The Holy See is one of Taiwan’s 15 diplomatic allies and the only one in Europe.

“The Chinese government’s recent issuance of the Measures for the Administration of Religious Personnel is solid proof of its increased suppression of religious freedom,” ministry spokesperson Joanne Ou （歐江安） told a regular news briefing.

The regulations “nationalize” religion, as they clearly state that all religious personnel in China should support the Chinese Communist Party （CCP）, she said.

The new measures take effect on May 1.

The regulations stipulate that the succession of a living Buddha should follow China’s rules, and that Catholic bishops in China should be approved and ordained by the Chinese authorities, the Chinese National Religious Affairs Administration’s Web site says.

The regulations also prohibit religious personnel from accepting their designation from a religious group overseas, the Web site says.

“The Taiwanese government will continue to strengthen its cooperation with the Vatican and the Catholic Church to defend the core values of religious freedom,” Ou said.

“Simply put, the CCP is the GOD of religions in China. How low must we go before the free world says enough?” he wrote.