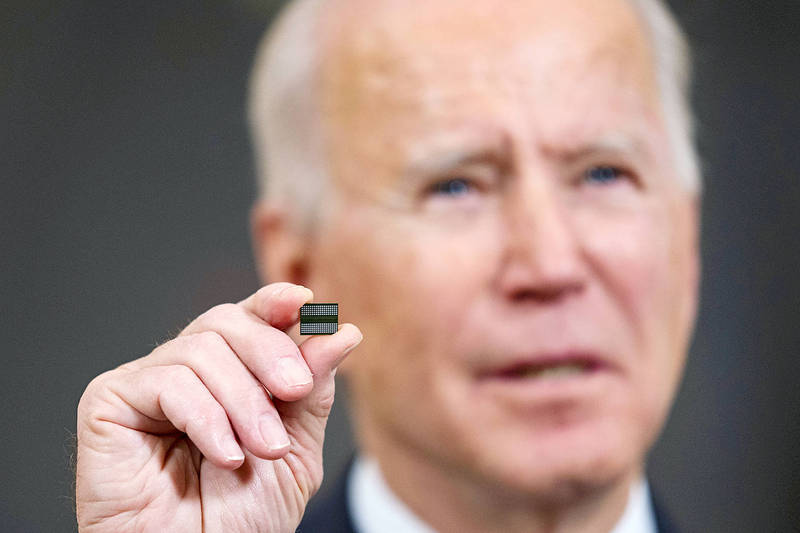 US President Joe Biden holds up a semiconductor before signing an executive order in the State Dining Room of the White House in Washington on Wednesday. Photo: Bloomberg

CHIPS: Minister of Economic Affairs Wang Mei-hua said Taiwan and the US have a track record of working closely together, of being ‘undeniably trustworthy partners’

US President Joe Biden on Wednesday ordered a review of US supply chains, seeking to end the country’s reliance on China and other adversaries for crucial goods.

However, the process could take months, offering no immediate solution for a shortfall of semiconductors that has idled vehicle production at several US factories.

Although Biden did not specifically mention Taiwan on this occasion, the US last month appealed to Taiwan to help with the semiconductor shortages.

Media outlets such as Japan-based Nikkei Asia have also reported that Washington is expected to pursue partnerships with Taiwan, Japan and South Korea in chip production.

Minister of Economic Affairs Wang Mei-hua （王美花） has reiterated that Taiwan is a reliable economic partner of the US.

“When it comes to the semiconductor industry, information and communications technology products, and biotech, the US and Taiwan have a track record of working closely together,” Wang said. “We are undeniably trustworthy partners.”

The signing of a memorandum of understanding regarding Taiwan-US economic prosperity would deepen bilateral ties, Wang added.

As a long-term and reliable partner of the US, the government would continue to work with Biden’s administration to deepen Taiwan-US global partnership and trade ties, Ministry of Foreign Affairs spokeswoman Joanne Ou （歐江安） said yesterday in a statement.

A US-Taiwan alliance in the semiconductor field would be good news for Taiwanese firms, said Liu Pei-chen （劉佩真）, a researcher at the Taiwan Institute of Economic Research （台灣經濟研究院）.

Biden’s review is not aimed at China or any other specific country, but instead focuses on diversifying supply more generally, said White House officials, who spoke on condition of anonymity.

Still, an overreliance on China and other adversaries for critical goods is a key risk that must be addressed, they said.

Biden met with US lawmakers at the White House to discuss the semiconductor shortage and ways to bolster supply chains.

US Senate Majority Leader Chuck Schumer said that he is asking the chamber’s top lawmakers to draw up legislation aimed at improving US competitiveness with China in manufacturing and technology, including bolstering the supply of US-made semiconductors.

The US semiconductor industry has been pushing Biden to include tax breaks and other financial incentives in his next legislative package to spur investment and research in the US — an effort that would take months to move through the US Congress.

Those assessments, to be completed within one year, would be modeled after reviews that the US Department of Defense uses to regularly evaluate the US defense industry.