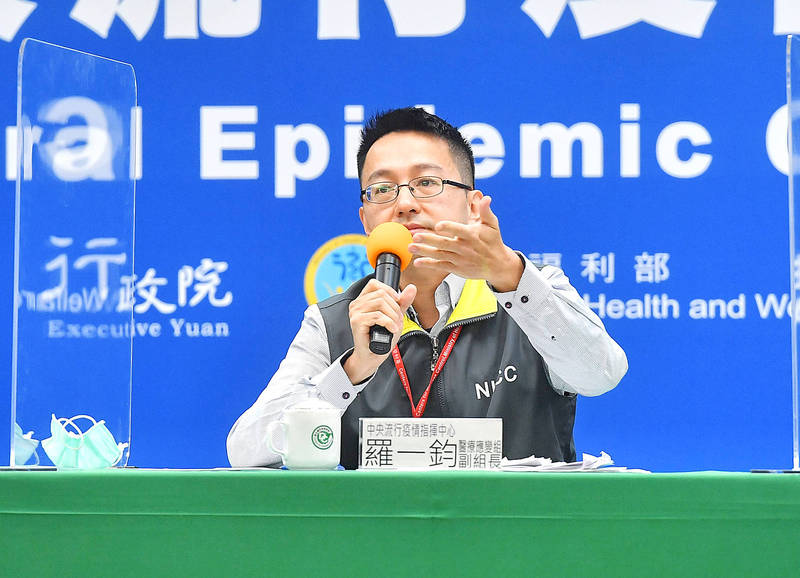 NO TIGHTER RULES: The low number of people seeking treatment for illness during the holiday proves that virus prevention measures are effective, the center said

The Central Epidemic Command Center （CECC） yesterday said it is considering extending the autumn-winter COVID-19 prevention program beyond its planned expiry date on Sunday next week.

Asked if the CECC plans to modify its COVID-19 prevention measures after a new variant was found in the UK late last year, Minister of Health and Welfare Chen Shih-chung （陳時中）, who heads the center, said that the center might extend the measures already in place.

Inbound travelers would likely continue to be required to quarantine in designated hotels, centralized quarantine facilities or at home if they are the only person in a housing unit, he said.

Chen said that he hopes that the center would starting next month allow shortened quarantine periods for inbound travelers from countries with low or low-medium COVID-19 risk, and residents on short-term business trips upon re-entry.

Other border control measures would likely remain in place, but the center would work toward gradually opening the borders for foreign visitors, he said.

Whether an inbound traveler has been vaccinated against COVID-19 would not be considered when determining individual virus prevention measures, Chen added.

Measures to prevent domestic infections would not be tightened, as aside from a cluster infection at a Taoyuan hospital, there was no other local outbreaks, he said.

All further polymerase chain reaction and antibody tests of people with connection to the hospital came back negative, Chen said.

Among 21 confirmed cases of the cluster, eight people have been released from isolation, while two are on ventilators in intensive care units, he said.

After the hospital resumes normal operations, which it plans to do tomorrow, hospital staff would be encouraged to use a COVID-19 tracing app, Chen said.

Centers for Disease Control （CDC） Deputy Director-General Philip Lo （羅一鈞）, deputy chief of the CECC’s medical response division, said that the smartphone app would record when users come in contact with each other, defined as within 1.5m for more than 15 minutes.

The app was developed last year, but has not been in use to trace the movement of members of the public, Lo said, adding that hospital staff would not be required to use it and movement data would only be saved on their respective phones.

Chen said that the center would discuss with specialists about removing the ban on eating or drinking on trains operated by the Taiwan Railways Administration and Taiwan High Speed Rail Corp.

Chen confirmed one new imported case of COVID-19, a Taiwanese in her 50s who lives in the US. She had tested positive there on Oct. 21 last year, and tested negative on Nov. 14 and Nov. 18.

She returned to Taiwan on Nov. 27 and quarantined at home with no symptoms, Chen said.

However, she tested positive in a paid test on Monday as she was preparing to return to the US, he said, adding that her antibody test results also came back positive.