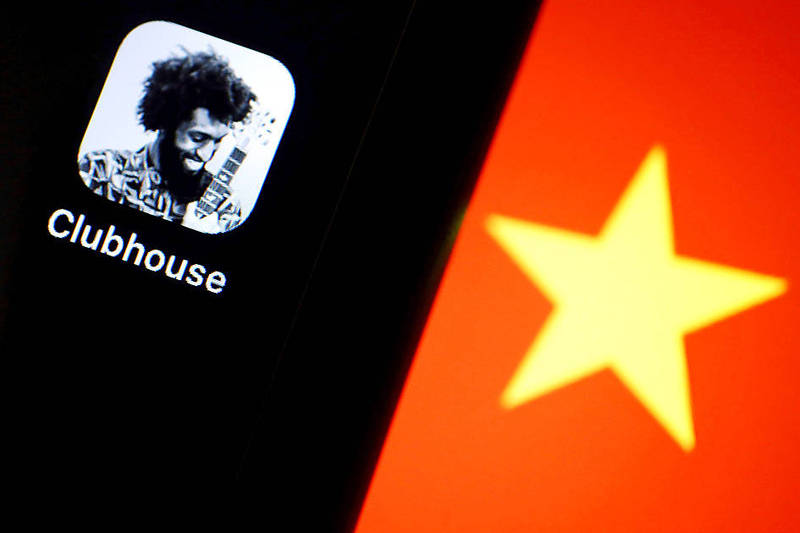 An illustration picture taken on Monday shows the social audio app Clubhouse near a star on the Chinese flag. Photo: Reuters

Clubhouse, the popular app that allows people to create digital discussion groups, said that it is reviewing its data security practices after the Stanford Internet Observatory （SIO） found potential vulnerabilities in its infrastructure that could allow external access to users’ raw audio data.

The SIO confirmed that Agora Inc （聲網）, a Shanghai-based start-up with offices in Silicon Valley, provides back-end infrastructure to Clubhouse and sells a “real-time voice and video engagement platform.”

User IDs are transmitted in plaintext over the Internet, making them “trivial to intercept,” it said.

User IDs are like a serial number, not the username of the person. Agora would likely have access to users’ raw audio, potentially providing access to the Chinese government, it said.

“Any observer of Internet traffic could easily match IDs on shared chatrooms to see who is talking to whom,” the SIO said in its Twitter feed about its findings. “For mainland Chinese users, this is troubling.”

SIO, a program at Stanford University that studies disinformation on the Internet and social media platforms, said it observed metadata from a Clubhouse chatroom “being relayed to servers we believe to be hosted in” China.

Analysts also saw audio being relayed “to servers managed by Chinese entities and distributed around the world,” its report said.

As a Chinese firm, Agora is subject to China’s cybersecurity laws and would be “legally required to assist the government in locating and storing” audio messages authorities said jeopardized national security, SIO said.

Agora did not immediately respond to e-mails outside regular business hours seeking comment.

“Any unencrypted data that is transmitted via servers in the PRC [People’s Republic of China] would likely be accessible to the Chinese government,” it said.

Since SIO was able to observe the transmission of metadata between servers, it believes the Chinese government would be able to collect metadata without having to access Agora’s networks.

However, SIO said Agora claims not to store user audio or metadata “except to monitor network quality and bill its clients,” which means it would not have any records of user data if Beijing were to request it.

It also said that as long as audio was stored in the US, it was unlikely that the Chinese government would be able to access it.

SIO said it chose to disclose the security issues because they were easy to uncover and because of the risk they pose to Clubhouse’s millions of users.

“SIO has discovered other security flaws that we have privately disclosed to Clubhouse and will publicly disclose when they are fixed or after a set deadline,” it said.

In a statement included in the report, Clubhouse said it would roll out changes over 72 hours to add “additional encryption and blocks to prevent Clubhouse clients from ever transmitting pings to Chinese servers. We also plan to engage an external data security firm to review and validate these changes.”