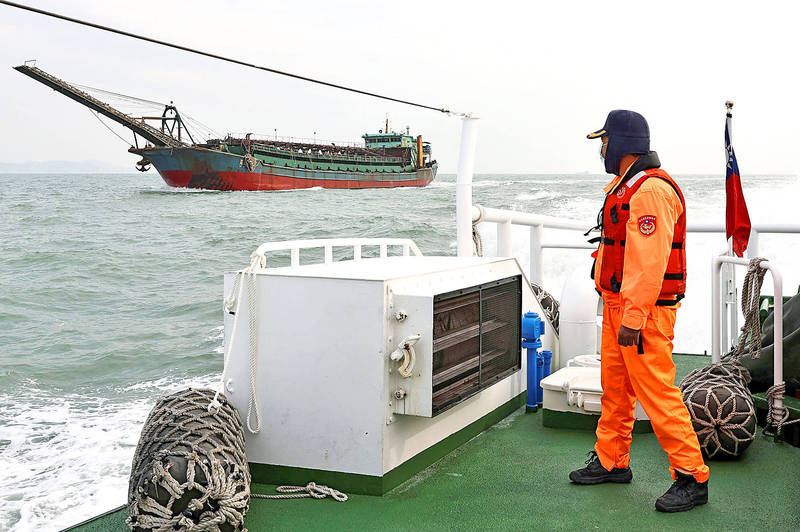 A coast guard looks at a sand dredger with a Chinese flag in waters off the Matsu Islands on Thursday last week. Photo: Ann Wang, Reuters

Coast guard commander Lin Chie-ming is on the front line of a new type of warfare that China is waging against Taiwan.

On a chilly morning late last month, Lin, clad in an orange uniform, stood on the rolling deck of his boat as it patrolled in choppy waters off the Matsu Islands. A few kilometers away, the Chinese coast was faintly visible from Lin’s boat. He was on the lookout for Chinese sand-dredging ships encroaching on waters controlled by Taiwan.

The Chinese goal, Taiwanese officials say, is to pressure Taiwan by tying down its naval defenses and undermining the livelihoods of Matsu residents.

Half an hour into the patrol, Lin’s nine-person crew spotted two 2,700 tonne dredgers, dwarfing their 90 tonne vessel. Parked just outside Taiwan’s waters, neither of the dredgers clearly displayed their names, making it difficult for a crew member to identify them as he peered through binoculars.

Upon spotting Lin’s boat, armed with two water cannons and a machine gun, the dredgers quickly pulled up anchor and headed back toward the Chinese coast.

“They think this area is part of China’s territory,” said Lin, referring to Chinese dredgers that have been intruding into Matsu’s waters. “They usually leave after we drive them away, but they come back again after we go away.”

The sand-dredging is one weapon China is using against Taiwan in a campaign of so-called “gray-zone” warfare, which entails using irregular tactics to exhaust a foe without actually resorting to open combat.

Since June last year, Chinese dredgers have been swarming around the Matsu Islands, scooping up vast amounts of sand from the ocean bed for construction projects in China.

The ploy is taxing for the Coast Guard Administration, which is now conducting round-the-clock patrols in an effort to repel the Chinese vessels.

Taiwanese officials and Matsu residents say that the dredging forays have had other corrosive effects: disrupting the local economy, damaging undersea communication cables and intimidating residents and tourists to the islands.

Besides Matsu, where 13,300 people live, the coast guard said that China has also been dredging in the shallow waters near the median line of the Taiwan Strait.

Last year, Taiwan expelled nearly 4,000 sand dredgers and sand transport vessels from waters under its control, most of them in the area close to the median line, the coast guard said.

In Matsu, there were also many Chinese vessels that sailed close to Taiwanese waters without actually entering, forcing the coast guard to be on constant alert.

The dredging is a “gray-zone strategy with Chinese characteristics,” said Su Tzu-yun （蘇紫雲）, an associate research fellow at the Institute for National Defense and Security Research. “You dredge for sand on the one hand, but if you can also put pressure on Taiwan, then that is great, too.”

China has been using other irregular tactics to wear down the nation of 23 million people.

In the past few months, the Chinese People’s Liberation Army has been sending warplanes into the nation’s air defense identification zone. Taiwan has been scrambling military aircraft on an almost daily basis to head off the threat, placing an onerous burden on its air force.

Military officials and Western analysts say that China’s gray-zone tactics are meant to drain the resources and erode the will of Taiwan’s armed forces, and make such harassment so routine that the world grows inured to it.

A security official investigating the matter, said that China’s sand dredging is “part of their psychological warfare against Taiwan, similar to what they are doing in Taiwan’s southwestern airspace,” where Chinese jets are intruding.

China’s Taiwan Affairs Office （TAO） said in a statement that Taiwan’s claims that Beijing is allowing dredging boats to engage in “illegal operations” near Matsu and the median line are baseless.

The office said it has taken steps to stop illegal sand-dredging, without elaborating.

Taiwanese authorities, it said, are using their claims of control over the waters near the islands to “detain mainland boats, and even resorting to dangerous and violent means in their treatment of mainland crews.”

Asked about China’s actions, the Mainland Affairs Council said that the Chinese Communist Party is engaging in “harassment” with the aim of putting pressure on Taiwan.

It said that the government had recently increased penalties for illegal dredging in its waters.

The Ministry of National Defense did not respond to questions.

Chinese President Xi Jinping （習近平） has not ruled out the use of force to take over Taiwan. If he succeeds — by gray-zone tactics or outright war — it would dramatically undermine the US’ decades of strategic dominance in the Asia-Pacific region and propel China toward pre-eminence in the area.

The Matsu Islands, Kinmen Island and Pratas Islands （Dongsha Islands, 東沙群島） lie several hundred kilometers from Taiwan proper. Their isolation, and their much-reduced Taiwanese military presence since the end of the Cold War, would make them highly vulnerable to a Chinese attack.

Matsu is just 9km from the Chinese coastline at the closest point. The island has just nine coast guard ships, ranging from nine to 90 tonnes.

On some days, the coast guard has faced hundreds of Chinese vessels, ranging in size from 826 to 2,450 tonnes, in and around the island’s waters, government officials said.

Lin said a similar scene played out on the morning of Oct. 25 last year, when he and his colleagues encountered an armada of about 100 Chinese boats.

“People were frightened by the scene,” he said, referring to local residents. “They were speculating about the purpose of the mainland boats and whether they would pose a security threat to the Matsu region.”

In some standoffs, the coast guard has sprayed high-power water cannons at the Chinese ships in an attempt to drive them away.

Ten of those arrested were given sentences of six to seven months in prison, while the others are still on trial, the coast guard said.

Taiwan is in the process of beefing up its coast guard, partly in response to the dredging threat.

Last year, President Tsai Ing-wen （蔡英文） commissioned into service the first of a new class of coast guard vessel, based on the design of an “aircraft-carrier killer,” a missile boat for the navy. More than 100 new coast guard boats are to be built in the next decade, Tsai said.

In the meantime, larger patrol boats have been sent to temporarily reinforce the coast guard in Matsu, whose 117 members are conducting 24-hour patrols.

The number of dredgers off the coast of Matsu dropped significantly at the end of last year, as winter weather brought rougher seas, which make dredging difficult.

When the seasons change and the seas are calmer, local residents fear that the dredgers will return.

Locals say that China’s dredging tactics are hurting their livelihoods.

Chen Kuo-chian, who runs a seafood restaurant on Nangan, said that the dredging has led to a drastic decline in the number of fish he catches off the island.

Three years ago, he was hooking a dozen a day with his rod, said Chen, 39, as he stood fishing on some rocks in a Nangan port.

Now, he struggles to catch one or two, he said.

The fears of a Chinese invasion are palpable on Nangan.

Chen said he thinks the sand dredging might be a precursor to an attack by Chinese forces.

“We don’t want to be ruled by mainland China,” he said. “We have freedom, which is limited over there.”

Mobile phone and Internet services for the islanders were disrupted, they said.

There were no such incidents in 2019.

Chunghwa Telecom said that it spent NT$60 million （US$2.1 million） on fixing the cables last year. It also hired a local fishing boat to conduct daily patrols to ensure the safety of the cables.

The coast guard said that most of the fully loaded Chinese vessels around Matsu have been seen heading with their sand in a northerly direction, toward the city of Wenzhou, where the local Chinese government has been touting a massive land reclamation project.

However, a Taiwan-initiated meeting with authorities in China’s port city of Fuzhou to discuss the dredging was “postponed indefinitely” and without explanation in late December last year, said Wang Chien-hua, who oversees economic development for the Matsu local government.

Taiwan had been planning to use the online meeting to urge Chinese authorities to enforce mandatory registration for dredgers and punish those who go out to sea without reporting to the authorities, an internal government note reviewed by Reuters showed.

TAO said the local authorities on both sides had maintained “necessary communication and collaboration” to ensure order on the seas.

The coast guard “will use force to drive away” Chinese ships that enter Taiwan’s waters, he said. “That way we can reassure the people in Matsu. At the moment, we are capable of doing this job.”