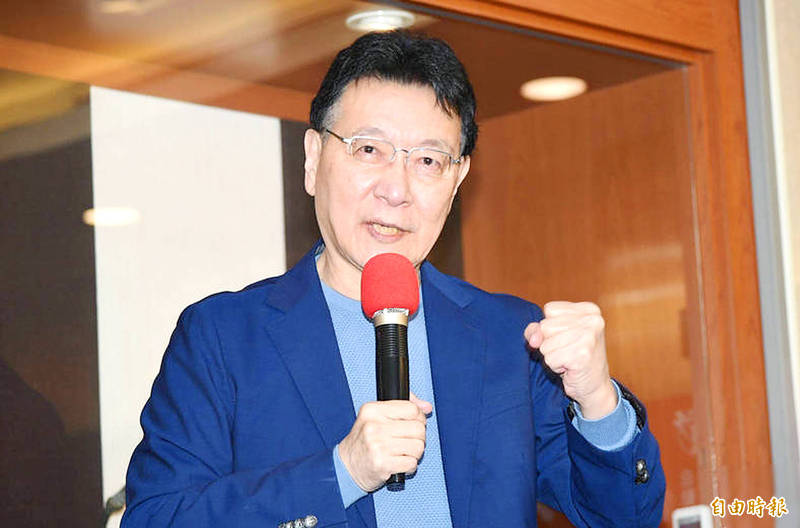 SAVIOR? Jaw Shaw-kong said Han Kuo-yu advised him to stand for KMT chairman as he believes Jaw is the only person who can save the party

After quitting the Chinese Nationalist Party （KMT） nearly three decades ago, media personality and Broadcasting Corp of China （中廣） chairman Jaw Shaw-kong （趙少康） yesterday said that he has asked the party to restore his membership, adding that he has not ruled out joining the race for KMT chairman.

Expressing concern about the political environment in Taiwan, Jaw said the “voice of reason” in the nation had been banished, and the KMT seems “afraid to speak up.”

“The KMT is the largest opposition party. Logically speaking, everyone expects the most from it,” he said. “But the KMT’s performance is disappointing.”

The KMT and pan-blue supporters, as well as Taiwan, are in need of a “strong leader,” he said.

Jaw was a “golden boy” of the KMT in the 1980s, having served as a Taipei city councilor and legislator before he and several other KMT members left in 1993 to form the New Party.

After losing the Taipei mayoral race to then-Democratic Progressive Party candidate Chen Shui-bian （陳水扁） in 1994, Jaw in 1996 announced that he would retire from politics.

Amid rumors that Han was planning to run for KMT chairman, Jaw said he assumed that Han was seeking his support.

However, “Han told me that I should run for party chairman, and that he believes only I can save the KMT,” Jaw said.

Jaw said he had met several times with Chiang, who welcomed his return to the party.

He added that he would wait to see if he qualifies before exploring the option of running in the KMT chairmanship election.

Asked if he plans to run for city mayor or county commissioner in next year’s local elections, or appear on the ticket in the 2024 presidential election, Jaw, 70, said he was “not opposed to any position” as long as he could serve the nation and the pan-blue camp.

He would resign as the host of a TV political talk show if he runs for KMT chairman, he added.

Chiang said the KMT “welcomes with open arms” anyone who is willing to support, join or return to the KMT at a time of relative difficulty for the party.

KMT Legislator Lin Wei-chou （林為洲） wrote on Facebook that while he would welcome Jaw’s candidacy, thereby giving KMT members “another good option,” he was against changing the rules to make Jaw eligible to run.

Expressing his support for Jaw rejoining the KMT, Han wrote on Facebook that he looks forward to “the KMT being able to, in a healthy competition, elect a leader who is greatly approved by everyone.”